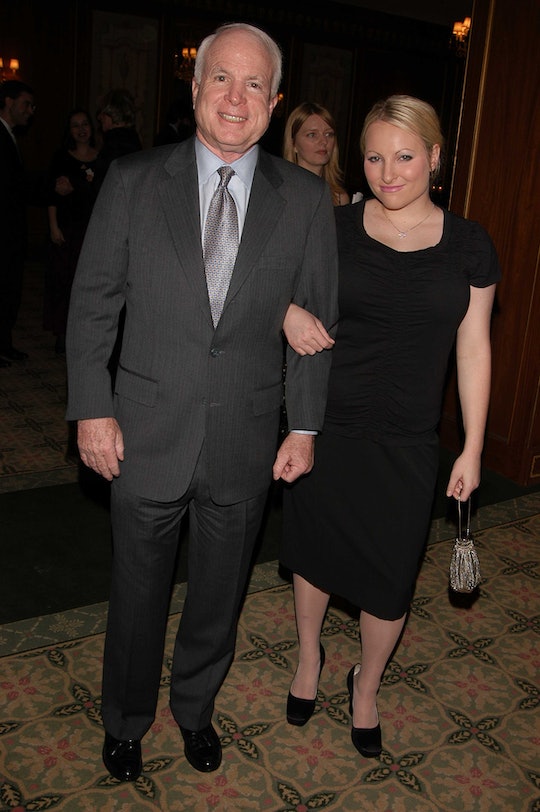 It's been two years since longtime politician and war hero Sen. John McCain died at the age of 81, and on Tuesday evening Meghan McCain reflected on her first Election Day without her father by her side during this contentious moment in history.

As Americans made their way to the polls on Nov. 3, McCain, a panelist on The View and a new mom to her daughter Liberty Sage, took to Twitter to reflect on the poignance of her first Election Day as a first-time mother without the late Republican senator.

"My first Election Day without my dad is my first with my daughter, Liberty," she wrote on Twitter. "Feeling overwhelmed with nostalgia and warm sentiments about the circle of life. I love Election Day, always will. Don't let ugly fleeting politics remove what's beautiful about our democratic process."

John McCain, a respected veteran and longtime politician, died after a long battle with brain cancer in August 2018. He was 81 years old and had represented his state in the Senate for more than 30 years, according to TIME, in addition to running for president twice. He left behind his wife, Cindy McCain, and seven children, including his daughter Meghan.

Although John McCain was a longtime Republican, his wife Cindy endorsed Democratic Presidential nominee Joe Biden ahead of the 2020 presidential election. "He supports the troops and knows what it means for someone who has served," Cindy told the Associated Press in a September interview. "Not only to love someone who has served, but understand what it means to send a child into combat. We've been great friends for many years, but we have a common thread that we are Blue Star families."

During an April appearance on Bravo's Watch What Happens Live, Meghan McCain did not endorse a specific candidate for president but did allude to her support for Biden as he was a close friend of her father's, according to CNN. "But it really shouldn't take a rocket scientist to know there's one man who made pain in my life a living hell, and another man who has literally shepherded me through the grief process," she said. "This really shouldn't be rocket science for people."

Beyond the election, the new mom, who is married to The Federalist founder Ben Domenech, has been open about how hard it has been to go through such a big milestone of welcoming her daughter without her father by her side.

"I love our little family and I have never felt so blessed, present, and grateful," she wrote in an Instagram post at the beginning of October. "This is the first time since my Dad passed that the part of my heart that broke off and left with him no longer feels missing...Thank you to all who have respected my protectiveness, boundaries, and privacy during pregnancy and now first steps of motherhood."