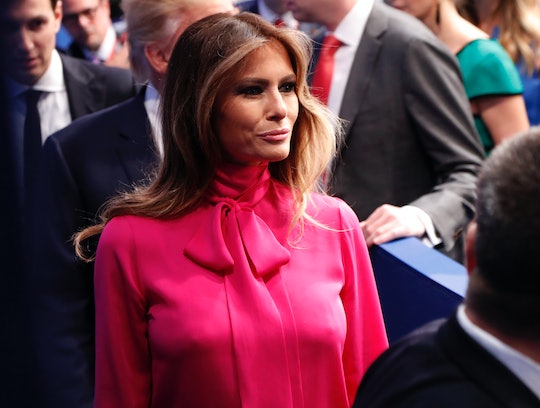 Donald Trump seems to be losing supporters on all sides, but clearly still has a few people in his corner. His running mate, Indiana Gov. Mike Pence, is one of them. And now, his wife has finally spoken up about the recent allegations of sexual assault against Trump. On Thursday evening, Melania Trump posted a statement demanding a retraction of reporter Natasha Stoynoff's People story, in which Stoynoff levied her own accusations of sexual assault against the Republican presidential nominee.

Natasha Stoynoff was a writer assigned to the "Donald Trump beat" in the early 2000s. She allegedly knew him and his family (including wife Melania Trump) quite well. In her first person account of Trump's alleged sexual assault and pursuit of her while married to Melania (who was pregnant for son Barron at the time) for People, Stoynoff remembered her interactions with both Melania and Donald Trump fairly fondly:

Melania was kind and sweet during our many chats, and Donald was as bombastic and entertaining as you would expect. We had a very friendly, professional relationship.

Then, in December of 2005 (right around the time that Trump was taped having a lewd conversation about kissing women without their permission and "grabbing them by the p---sy"), Stoynoff alleges that her relationship with the Trumps changed. She wrote that she and Trump were left alone during an interview, while Melania went to change, and Trump allegedly decided he wanted to show her a particularly "tremendous" room:

Melania Trump this week had her lawyers contact People Editor-In-Chief Jess Cagle and demand a retraction of the story because she has taken umbrage with one particular element. She is not asking for a retraction based on Stoynoff's claim that Trump sexually assaulted her, nor her recollection of Trump telling her they were going to have an affair (as though she had no say in the matter). In the latter instance, Stoynoff claimed,

Melania Trump's furious letter from her lawyer, Charles Harder, however, did not address that allegation. Instead, the letter demanded a prominent retraction and apology, based on this segment of the People piece:

That winter, I actually bumped into Melania on Fifth Avenue, in front of Trump Tower as she walked into the building, carrying baby Barron.

“Natasha, why don’t we see you anymore?” she asked, giving me a hug.

I was quiet and smiled, telling her I’d missed her, and I squeezed little Barron’s foot. I couldn’t discern what she knew. Did she really not guess why I hadn’t been around?

To be clear: Melania Trump went through the effort of having her lawyer draft a letter demanding that People print a retraction... but only because she didn't want anyone to think she and Stoynoff were friends. But the part of the story where her husband allegedly sexually assaulted and pursued the People reporter apparently didn't register.

In a statement on Thursday night, People Editor in Chief Cagle wrote:

We are grateful to Natasha Stoynoff for telling her story. Ms. Stoynoff is a remarkable, ethical, honest and patriotic woman, and she has shared her story of being physically attacked by Donald Trump in 2005 because she felt it was her duty to make the public aware.

To assign any other motive is a disgusting, pathetic attempt to victimize her again. We stand steadfastly by her, and are proud to publish her clear, credible account of what happened.

It is heartbreaking that her fear of retaliation by Trump kept her from reporting the incident when it happened. She has carried this secret for more than a decade, and we hope that by coming forward now she is relieved of that burden.