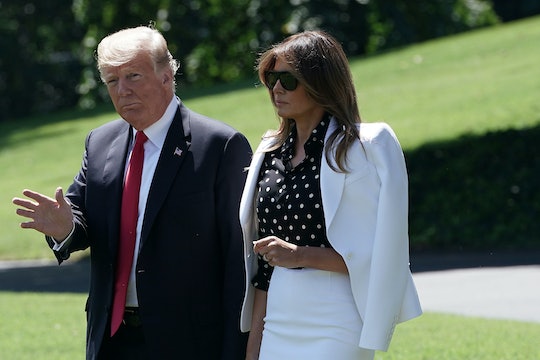 Melania Trump was once a fashion model, so I think it's safe to say she knows a little something about the unspoken power behind the clothes we wear. She might even understand the value of being able to make a statement with little more than a statement coat than the rest of us, especially considering she has a tendency to avoid public speaking. Ever since her husband Donald Trump became the President of the United States, she seems to be speaking volumes with her outfit choices. Like the problematic white hat Melania Trump wore during her Africa visit that seems to be causing outrage on Twitter.

Melania Trump has been on her first official solo trip to Africa since becoming First Lady of the United States. On Friday she was visiting Kenya as part of her four-nation tour of the continent; before coming back stateside she will have visited Ghana, Malawi, and Egypt as well, according to The New York Times. While in Kenya, the first lady was driven out to enjoy a Kenyan safari in the grasslands of the David Sheldrick Wildlife Trust. She didn't appear to say or do anything troublesome during this visit, but I suppose she didn't have to; her white pith helmet, a hat some critics have noted is a symbol of African colonialism, might have been doing all the talking for her.

Romper has reached out to the White House for a statement and is waiting for a reply.

So what is the issue with the white pith hat? Other than the fact that it looks about 200 years out of date? According to The Guardian, white pith helmets were worn by European explorers who traveled to Africa, Asia, and parts of the Middle East in the 19th century. These helmets were eventually worn by military officers in these regions and quickly became a "symbol of oppression." These helmets are no longer worn by members of the military, guides, or wildlife experts in Africa because they were too controversial, and also not that practical. And yet, Melania Trump decided to wear not just the pith helmet but also an entire ensemble that seemed to be inspired by the 1986 movie Out of Africa.

Was it simply an odd outfit choice? Was she just going for a whole look? Or was this a symbol of Melania Trump's outdated perception of Africa? Let's check Twitter.

Sadly, this isn't even the worst statement Melania Trump has made with her outfit choice. When visiting detained refugee children in Texas earlier this year, she wore a green jacket with the words "I really don't care, do u?" written across the back.

I'm sure plenty of people will argue that these fashion choices could be just unconscious outfit picks Melania Trump happens to like. But here's the thing; she represents not just the White House on these official visits but the entire country as well. So when the First Lady of the United States wears such a tone deaf hat that evokes a painful past for the nation she's visiting, she doesn't get a free pass. She knows she's being watched by the world.

But I guess she really just doesn't care.