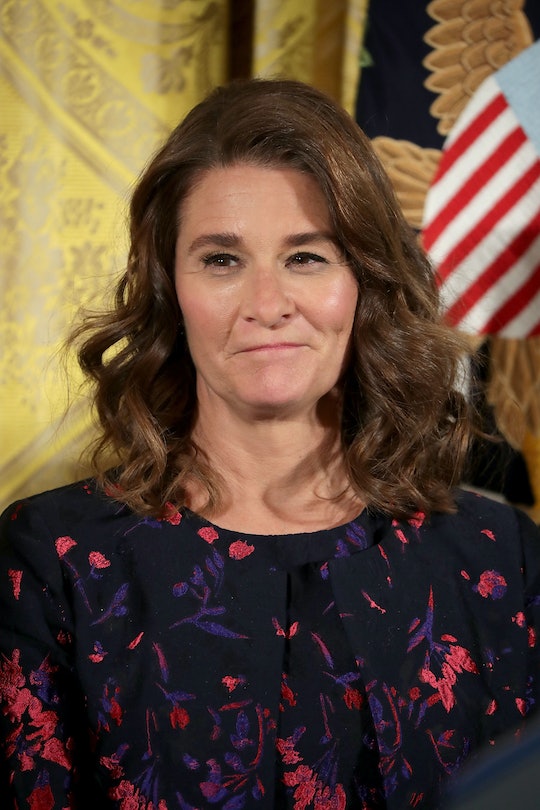 Melinda Gates Admits That, Yes, There Are Downsides To Giving Your Kid A Smartphone

I remember my oldest son's first smartphone; I bought it so innocently. Figured he would need it to get in touch with his mom in a heartbeat, because why else would a preteen want a smartphone? I watched as it took hold, and (for awhile, at least) felt powerless as a parent. I'm not the only one. In a recent essay for The Washington Post, Melinda Gates talked about the downsides of kids having smartphones. So now I feel better because she is, after all, Melinda Gates and is great at everything.

The philanthropist behind The Bill and Melinda Gates Foundation recently got real about smartphones and the profound effect these devices had on her parenting. Despite being married to one of the original technological innovators of our world (Microsoft co-founder Bill Gates), Gates admitted in her Washington Post essay that she was taken aback by the difference smartphones made in the lives of her three children; daughters Jennifer and Phoebe and son Rory. Gates wrote:

Like many parents with children my kids’ age, I didn’t understand how they would transform the way my kids grew up ― and the way I wanted to parent. I’m still trying to catch up.

Gates noted that smartphones and the internet have changed enormously since her oldest daughter was "dipping her toe" into the world of social media apps. She wrote:

Still, Gates believes in the inherent benefit of the internet and technology as a means of connecting, communicating, and educating ourselves, particularly for those living in developing or depressed communities. As with anything in this world, technology is ultimately all about balance. One recent study found that 56 percent of kids in the eighth grade who spent more than 10 hours a week on social media reported they felt unhappy. As Babble reported, the Gates' family didn't allow their children to have smartphones until they were 14.

In fact, Gates admitted she wished they had waited a little longer still, because with age comes maturity, according to her Washington Post essay:

Phones and apps aren’t good or bad by themselves, but for adolescents who don’t yet have the emotional tools to navigate life’s complications and confusions, they can exacerbate the difficulties of growing up.

The family also implemented a "device-free dinner," which means "nothing at the table with an on or off switch." Even the parents must follow this rule, and I have to admit it's a good one.

In my own life, I have noticed that people (meaning parents and other adults) are far too quick to lament the amount of time kids spend on their phones. The kids end up feeling judged by people and retreat even further into their social media presence.

Smartphones and social media apps aren't going anywhere. Use with caution, try not to judge, and cross your fingers that all will turn out just fine — that seems like the soundest plan available to parents.