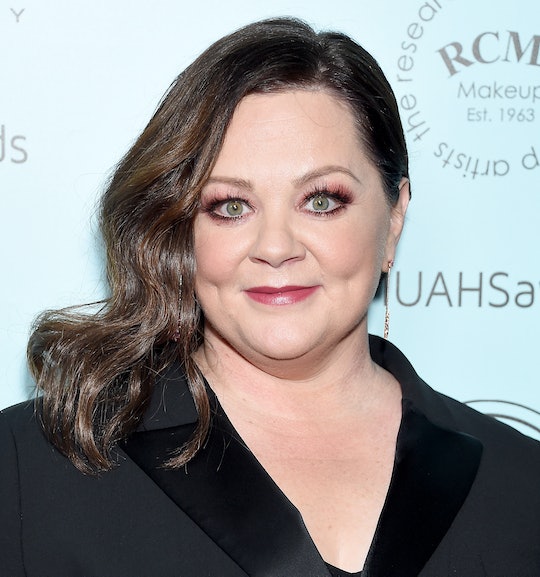 When Melissa McCarthy is involved with anything, you can always count on her to lighten the mood. So when she and Brian Tyree Henry presented the Oscar for Best Costume Design dressed as a character from one of the Oscar-nominated movies this year, it was kind of perfect. Honestly, I would expect nothing less than Melissa McCarthy as The Favourite's Queen Anne on the Oscars stage.

Not only was it a totally over-the-top costume, complete with a bunny hand puppet, but it also made some viewers wish that McCarthy had been chosen to host this year. It would have been better than being left with no Oscars host at all. And as with everything McCarthy does to entertain audiences, her costume inspired by The Favourite was hilarious and impressive. I mean, can we just start a petition now to have her host the next big awards show? Does it work like that?

McCarthy showed up on the Oscars red carpet in a white and black jumpsuit, but she traded her formal attire for something a little more formal and appropriate on the stage, as she helped present the award for Best Costume Design tonight. The Favourite didn't win in that category, but McCarthy's dress designer should probably be given an award for creativity.

The costume had a long and elaborate train covered in bunnies similar to the puppet McCarthy held as a nod to the 17 bunnies in the film representing Queen Anne's 17 lost children, according to Vox. The costume also had the familiar royal collar and McCarthy traded her long brown hair for a closely cropped reddish orange 'do. It was definitely memorable all around.

McCarthy's Favourite costume at the Oscars tonight was so memorable that it has already inspired a Twitter account dedicated to her bunny. Yes, McCarthy's bunny, which was part of her costume, now has its own Twitter account. What a time to be alive. To be fair, that bunny was almost as important as the award McCarthy and Henry were presenting. The camera even zoomed in on it at one time.

McCarthy has appeared or starred in movies across almost every genre over the years and although she may be best known for slapstick comedy, she was nominated for a 2019 Oscar for Best Performance by an Actress in a Leading Role her role in Can You Ever Forgive Me? The biographical dramedy is based on author Lee Israel, who is most famous for forging other authors' work for profit. It's a role that shows McCarthy's range as an actress, but if she could always and forever dress is absurd costumes at award shows, that would be great.

McCarthy's costume as The Favourite's Queen Anne was so extra, but I don't think anyone expected her to come out on the stage and co-present an award with no fanfare. That's not how McCarthy works and if the Oscars is looking for 2020 host, I highly suggest considering McCarthy. I can see her coming out in different looks throughout the show to honor the different movies in the Best Picture category next year and it would be everything. If that never happens, though, we will always have McCarthy's costume at the 2019 Oscars.