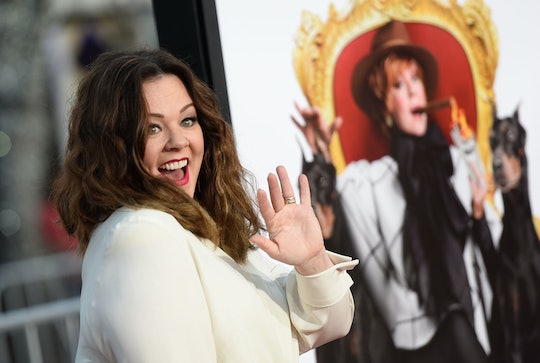 On Saturday, with her signature combination of hilarity and heart, Melissa McCarthy accepted MTV's Comedic Genius Award at the MTV Movie Awards, which aired Sunday. McCarthy, who is the first female recipient of the award, was carried to the stage like the queen she is and delivered into co-host Dwayne Johnson's arms, reminding us exactly why she was the perfect recipient for this honor: She owns her success. McCarthy's win and her acceptance speech didn't just matter because it's a medium-big deal award or because she was the first woman to receive it. They mattered because they focused entirely on her career and her field — not her weight or her family or any of the other things that women, especially celebrity women, are evaluated on rather than their actual work.

McCarthy's remarkable comedic talent is news to no one. She had fans laughing from the start of her career as Sookie Saint James on Gilmore Girls, but her breakout role in Bridesmaids marked a sea change for women in comedy. Though women have been funny ever since there have been women, it arguably took McCarthy and the rest of the Bridesmaids cast to make that a given.

She earned an Academy Award nomination for that performance and won her first Emmy for her role in the hit TV show Mike & Molly. If you haven't watched yet, her lip-sync rendition of “Colors of the Wind” from the Pocahontas soundtrack will leave you breathless from laughter (not to mention her seamless DMX performance).

When McCarthy took the stage Saturday (the show took place Saturday but actually aired Sunday) to accept her award, she did an important thing: She used her acceptance speech pay tribute to the women who made her the comic she is today, saying that although she is the first woman to receive the award, there have been plenty of other woman who deserved the honor:

I might be the first woman to receive this award but I am certainly not the first one to deserve it. I think I am a walking human patchwork up all of the remarkable funny, women who I have loved and studied over the years.

McCarthy went on to list female comics past and present who aided in her success, including a shout out to her mom, of course. She thanked these women —  Carol Burnett, Jane Curtain, Phyllis Diller, Whoopi Goldberg, Teri Garr, Madeline Kahn, Lucille Ball, Gilda Radner, Julia Louis-Dreyfus, Diane Keaton, Tracey Ullman, Bette Midler, and Lily Tomlin — for teaching her not to fear being the butt of jokes or worry about being likable or perfect, advice she says she has truly taken to heart in the face of criticism.

But equally important was what she didn't do. At no time during her acceptance speech did McCarthy reference her weight or her kids, even though these are topics she is often asked about as a female celebrity, particularly a female celebrity who is not a size 2.

McCarthy has not only paved the way for more women in comedy by being a comedic badass, she has also set a precedent for size diversity in Hollywood — in fact, not paying attention to size at all — setting the record straight for those who dare to focus in on her weight instead of her talent. In the face of body-shaming criticism, she fights like hell against the notion that women’s bodies are up for public discussion.

“For someone who has two daughters, I’m wildly aware of how deep that rabbit hole goes,” she said of Hollywood sexism during an interview with Entertainment Weekly, “But I just don’t want to start listening to that stuff. I’m trying to take away the double standard of ‘You’re an unattractive bitch because your character was not skipping along in high heels.’”

I think any woman can appreciate McCarthy's no-bullsh*t approach to body positivity and her blatant condemnation of those who think it’s OK to chip away at a woman’s image. She has made it clear that her weight and appearance shouldn’t be part of a public conversation. How she feels about herself is not up for debate, and it certainly isn’t for some body-shaming critic to decide. Melissa McCarthy makes it clear that she, her daughters, and all women deserve so much better than that.

And speaking of her daughters, McCarthy didn't mention them, and that's a good thing too. Female celebrities are conditioned to put motherhood in the spotlight above their professional achievements, something which men are never expected to do. McCarthy has mentioned her two daughters proudly in interviews in the past, but this award wasn't about them. It was about her, for her work, because you are allowed to be someone other than a mom — even, and perhaps especially, when you win a big award. Her kids know they are loved. They may also know that in some indirect way this award is also for them. But mostly it's not. It is at least 99 percent for the woman who earned it by making us laugh, for her work, and as she graciously pointed out, for the work of the female comedians who paved the way for her. She showed that it is OK to own what is yours, separate from your identity as a mother.

So McCarthy's win and acceptance speech were about a lot of things. They were about her achievements. They were about all the women who have made her own success possible. They were about the fact that a non-sample-size woman who is a mother can be one of the world's top comedians, which should be a given but isn't, and about her not having to make this win about or for anyone but her hardworking self.