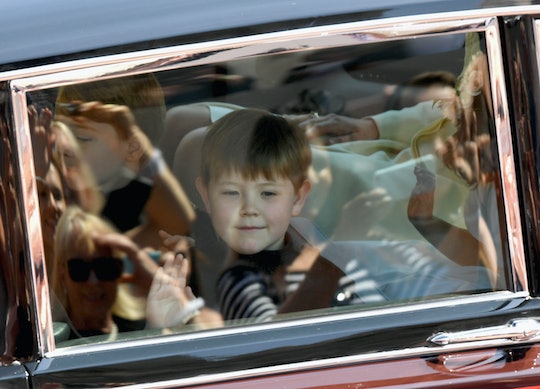 Some watched the royal wedding for the hats, some watched it for the fashionable attire, and some watched to get a glimpse of the bride and now Duchess of Sussex, Meghan Markle. Others, however, watched for the adorable bridesmaids and page boys. And the memes and tweets about the page boys are proof positive that children make a wedding.

Earlier in the week, and prior to the royal wedding, the bridesmaids and page boys were confirmed and, well, the group was young, adorable, and poised to steal the proverbial show. Markle didn't have a maid of honor during the ceremony, but did have bridesmaids Princess Charlotte,3, who is Prince Harry’s niece; Zalie Warren, 2; and Florence van Cutsem, 3; Markle’s Remi and Rylan Litt, who are sisters aged 6 and 7 respectively; and Ivy Mulroney, 4, per The Guardian. The page boys in attendance were as follows: Prince George, 4; Jasper Dyer, 6; and Brian and John Mulroney, both 7. And, as to be expected, the page boys quickly stole some of the Markle and Prince Harry's attention, what with their ridiculously adorable (if not slightly mischievous) facial expressions, miniature suits, and their bravado while walking down the aisle.

Here are just a few tweets and memes that showed how quickly the internet was losing their you-know-what over these dashing young lads:

Of course, the weeks leading up to the royal ceremony weren't without drama, so perhaps the young bridesmaids and page boys provided much more than just adorable wedding party attendants, but a great reprieve from the stress us adults seemed hellbent on bringing.

From the "is he or isn't he" status of Markle's father, who was initially going to walk her down the aisle, then wasn't, then, after a statement released from Kensington Palace, didn't attend the event at all, to the questionable actions of Markle's half-siblings, it wasn't exactly smooth sailing when it came to preparing for the royal wedding.

But do you know who doesn't care about all that unnecessary drama? Children. Yep, they don't give a single second of energy to that nonsense, and, in the end, they truly embody what is important during a wedding: the small moments, easily missed, that reminds us all that we're in the presence of love and, as a result, should be happy, smiling, and quick to celebrate.

The page boys present were all sons of members very near and dear to Prince Harry and Markle's heart, including Prince George, Harry's nephew. According to The Guardian, "Brian and John are the children of Markle’s close friends the Canadian stylist Jessica Mulroney and her TV host husband Ben, whose father is the former Canadian prime minister Brian Mulroney." So the wedding, as most weddings are, was a family affair, all the way down to the miniature bridesmaids and page boys.

Their ability to essentially "behave themselves" quickly captured the internet's attention, too. Minus a few hilarious facial expressions, the page boys did as they were instructed to do... a celebratory moment for anyone who has ever tried to get a child to behave at a wedding.

Here are a few more tweets that highlighted this, honestly, miraculous feat.

Rarely does a wedding go off without a hitch, but the royals know what they're doing. After all, this blessed affair wasn't their first rodeo, and in a few decades it won't be their last, either. So our hats (fancy hats, mind you) are off to the adorable bridesmaids and page boys, who kept it together, for the most part, during these unforgettable nuptials.