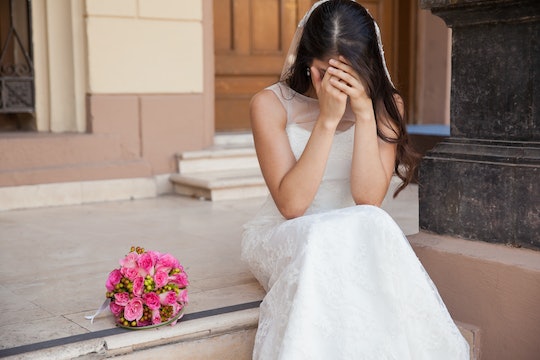 Here is a brief list of all the things 12-year-old girls should be doing: finding their best friend; going to school; figuring out the sort of woman they might want to be someday in the distant future; reading books; listening to music; laughing. Not getting married. Obviously, right? Apparently that's not so obvious to some, as a recent study discovered. A report released by The Tahirih Justice Center in Washington found that men are marrying girls as young as 12, thanks to certain loopholes in state laws.

The report, which was released on Wednesday, found that 200,000 underage children were married in the United States between 2000 and 2015. Most of these were girls married to considerably older men. How is this possible? Despite the fact that many states don't allow children under the age of 18 (the legal age of consent) to marry, a judge can approve a union based on parental consent. Some states are working towards overturning those laws. In 2016, the state of Virginia enacted a new law that prohibits children under 18 from marrying after coming under fire for allowing girls as young as 12 to marry if evidence could be provided that they were pregnant or had parental permission.

While some states, like Virginia, Maryland, and New York are making strides to end the possibility of child marriage in the United States, there is still considerable room for improvement. The report by The Tahirih Justice Center, a non-profit organization that advocates to end violence against women and children, looked at child marriage laws in all 50 states as well as the District of Columbia and made several startling discoveries, according to NPR.

Once a minor is married, voluntarily or otherwise, it is nearly an insurmountable task to try to leave the marriage. As difficult as it is for a fully emancipated adult, it is vastly more difficult for a child bride to leave what can often be an abusive situation, as the study's lead author Jeanne Smoot noted to The Huffington Post:

The adult in these relationships typically holds all the cards and all the power. They know and manipulate the dependance of the child spouse, from the roof over their heads to a ride to the grocery store.

For underage brides, the hardships often don't stop if they walk out the door. They might find themselves forced to quit high school and looking for employment with limited options because of state labor laws.

In other words, the laws of some states legally support the marriage of children who, in some cases, are not even legally able to consent to have sex (as the report by The Tahirih Justice Center noted), but those same children may not be able to work or to rent an apartment.

But if their parents sign off for whatever reason, they can be married. To men who too often do not have their best interests at heart.

More Like This
Here Are Parents' Top Trending Searches In 2022, Because Google Really Is Our BFF
Lizzo's Mom Gushes About Her Daughter As A “Champion Of Others” Who “Builds You Up”
21 Christmas Movies To Watch On Netflix This Holiday Season
'Harry & Meghan' Shares Never-Before-Seen Photos Of Archie & Lilibet