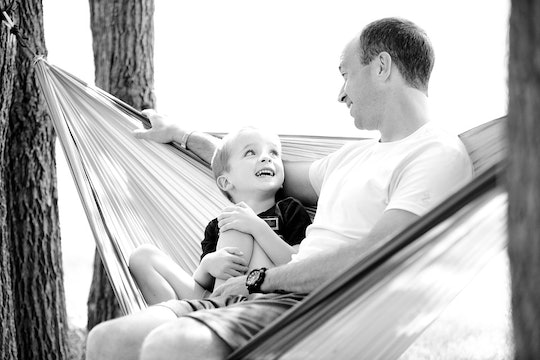 Millennial Dads Are More Involved Than Ever

Growing up as the daughter of a single mom, I was terrified of my friends' dads. They felt alien to me, foreign. It wasn't just their deep voices or their big man height that threw me off, it was how remote they seemed, all of them. They were present at dinner or in front of the TV, but they were never really present. I am happy to say, all of that seems to have changed. All around us, men are more involved in parenting than ever before, and study after study shows this generation of young people are reaping the benefits of having a connected relationship with their fathers.

Professor of pediatrics at the University of Maryland Maureen Black talked to Parents magazine about a study she had helped to conduct that looked at the benefits of involved fathers. She noted:

We found that fathers who are involved with their children have children with fewer problems. That added involvement from a father helps children tremendously.

Black also noted that children who were actively involved with their fathers enjoyed increased language skills and didn't appear to struggle with as many behavioral problems. These results were the same regardless of whether or not the father was living with the child or living away. In short; dads can have a positive influence on their children regardless of their address.

Another study, this time out of Britain's Oxford University, looked at the way an involved paternal figure affected the way a child learns. Eirine Flouri, one of the study's authors, told Parents they had looked at 17,000 children and noted:

An involved father figure reads to his child, takes outings with his child, is interested in his child's education, and takes a role equal to the mother's in managing his child.

The children who enjoyed such a positive relationship with their father tended to have higher grades and a more positive outlook at education in general. A similar study conducted by the U.S. Department of Education noted that children with involved fathers were 43 percent more likely to get higher grades.

Of course, it's not all about grades. So much depends on the way society looks at a father's role in the family. It's a different world out there for dads these days. While once upon a time, it would have been considered "unmanly" to take time off work to be with your baby, the world has evolved. Many companies offer new fathers paternity leave in an effort to acknowledge their importance in raising their child. And fathers in general are spending more time with their children, but they're also more interested in kids. CNBC shared a recent Google statistic that found more millennial dads watch videos of adorable kids on YouTube than anyone else. Akash Pathek, a brand marketing director for McDonald's, discussed this finding at a YouTube panel in March and explained the shift in idealogy through the generations:

This generation of dads doesn't seem interested in repeating those gender stereotype, classic parenting roles (the remote father, the exhausted mother) they might recognize from their own childhood. They want to involve their kids in their lives, nurture a lasting friendship with them.... and ultimately, define whatever they think their own "normal" might look like as a father.