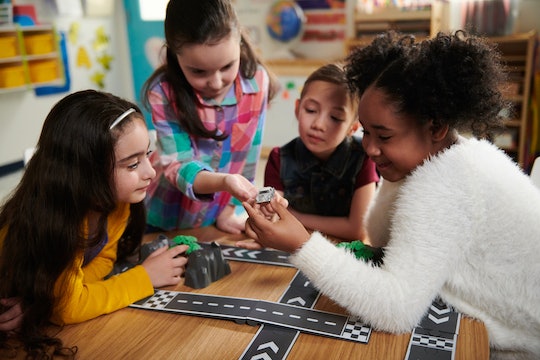 Check Your Blindspot: Girls Can Love Toy Cars Just As Much As Boys

"Girls have no limits! Boys can be champions!" kids excitedly chanted at an event on National STEM/ STEAM Day where Mercedes-Benz USA and Mattel gave 50,000 kids toy cars. Why? The companies are determined to combat gender stereotypes because the idea that girls can only play with pink dolls and boys can only play with things like robots and trucks is oh-so-antiquated.

More Like This
Vaccinated People Can Ditch Masks. Where Does That Leave Kids?
Apple Card Family: How It Works & What Your Kids Can Learn
Here Are The Best Kids' Shows On Hulu To Enjoy As A Family
This First-Grader Convinced An Educational App To Add Black Hairstyles To Avatars

On Friday, children in New York City, Atlanta, and Los Angeles took part in a new program called "No Limits," created by Mercedes-Benz along with Mattel and the National Girls Collaborative Project (NGCP), which aims to encourage boys and girls to pursue their passions. "Whatever they aspire to be — an astronaut, engineer, judge, nurse, even the President, we want all children to dream big, dream bold and never give up on that dream," Mark Aikman, general manager of marketing services for Mercedes-Benz USA, said in a press release.

At Friday's event, boys and girls learned how to code, shared what inspires them, and were introduced to the trailblazing story of race car driver Ewy Rosqvist, the first woman to compete in (and win) the Argentinian Grand Prix in 1962, crushing gender norms in the process. After watching a video about Rosqvsit, kids were then gifted a Matchbox die-cast toy replica of the same exact car she drove.

"We hope that both the girls and the boys that we give these toy cars to nationwide will use it in their daily lives just as a symbol that they can do anything and they really have no limits," Lindsay Munson from Mercedes-Benz USA tells Romper. "And just to dream big and dream bold."

Toni Robinson — the president of the nonprofit Digital Girl Inc., software engineer by trade, and helped lead Friday's event in New York — is especially passionate about debunking gender stereotypes. "If you don’t see it, you can't be it," Robinson, who has also worked in IT for decades, tells Romper, adding that the Brooklyn-based organization's aim is to "demystify the whole STEM discipline" so more young women are inspired to pursue careers in science, technology, engineering, math, and more.

And that's important, as research shows that just 28% of women are represented in the science and engineering workforce. Ultimately, Robinson says she hopes the kids she met today at Mercedes-Benz USA and Mattel's event remember to "think outside the box and champion a cause for somebody else" because "there are no limits" to what they can do.

Indeed, as Olivia Pavco-Giaccia, director of engagement and innovation NGCP, tells Romper, "something like gender shouldn’t keep you from dreaming big, having no limits, being whoever it is that you want to be."

Earlier this year, Mercedes-Benz USA released a video launching its "No Limits" initiative. And in it, girls were asked which toy they wanted to play with after they were presented with things like unicorns and dolls and plastic tools and toy cars. All of the girls chose the stereotypical "girl" toys and explained that they didn't choose the car because it's a "boy" toy. However, after they were shown the video of Rosqvsit's win, as kids were shown today, their faces lit up and they had a change of heart. "It makes me feel proud," one girl said in the video.

For those interested in the toy car kids were gifted today, Mercedes-Benz USA says they'll be available to buy in brick and mortar stores like Target and Walmart starting in December.