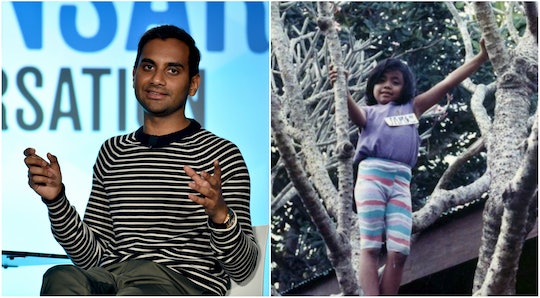 "What shall we do about our Large Grown Sons?" the internet has wondered these past weeks. "Surely they aren't all bad." We have all been so busy deconstructing past sexual encounters that people have begun to worry that we are in a "sex panic." Let me tell you that is not the case: these conversations about consent are not just the purview of grown men and women — #MeToo starts young. I would know. My earliest sexual experience happened at age 5 or so.

It’s been almost a week since the story broke where a woman named “Grace” accused comedian Aziz Ansari of sexual misconduct. The reactions ranged from "it was just bad sex" to an act of "revenge porn." The conversation for the most part has focused on whether or not we need to hold men accountable for wrongs committed in the twilight of a rapidly shifting sexual landscape — whether Ansari should lose his job, and so on. Going forward, we seem to agree, grown men cannot say they don't understand consent. But this issue goes back to the fundamental lessons of childhood, to the conversations parents are or are not having with their children right now.

I spend almost every day thinking about what sort of lessons I need to teach my 22-month-old son so he becomes a stellar human being.

Perhaps one of the reasons this conversation has carried on is how relatable this particular situation is compared to other sexual assault stories coming out of Hollywood — it’s a date gone horribly wrong, the kind that a lot of women and men my age have probably been on countless times. The reason why it’s so common is probably the culture we were raised in: that taught us women should play hard to get and let men pursue them.

It’s clear as day that this kind of thinking is borne out of the wide gap in proper sex education; now that I’m a mom, I spend almost every day thinking about what sort of lessons I need to teach my 22-month-old son so he becomes a stellar human being. It will take so much more than explaining to him the importance of sexual equality — women have sexual needs too and they should be able to talk about it and ask for it if they want without being slut-shamed — and, yes, consent once he is a little older. It will take so much more than adequately preparing him for the dating world once he is of age. If there’s one thing about Ansari’s actions that was made obvious to the mom in me, it’s that the issue of sexual misconduct is not just an issue parents should worry about once our children are grown.

Not once did I think it was wrong, because why would it be wrong? We were kids.

I am a survivor of sexual assault. My earliest experience happened to me when I was about 5 or 6 years old. A boy neighbor (about the same age as me) and I would play house and pretend to be married. He would tell me to go into the bathroom with him, shut the lights off, and rub his genitals on the opening of mine. As far as I can remember, this happened on more than one occasion, and not once did I think it was wrong, because why would it be wrong? We were kids. I wasn’t being physically hurt. I categorize this assault, but we almost have no framework for how to consider an incident like this, deep in our past.

My last experience happened when I was 25 years old. I went out with a man I met on an online dating site, and we began a consensual sexual relationship. In one of our encounters, he told me he wanted to try anal sex, and when I hesitated, he told me I’d enjoy it. I didn’t. I told him I wanted to stop, but he didn’t; he was a lot bigger and heavier than I was and I was basically pinned to the bed while he kept on going. When he was done, he thanked me for being a trooper. I ran into the shower and cried; he followed me and told me he loved me.

After I wrote about my #MeToo experience, my family discussed it at length. We talked about whether it was the right decision to publish my story for all the world to see. (My answer is yes.) We talked about the men with whom I shared my experiences, how much they detested the guy who raped me. Members of my family admitted to knowing about my bathroom meetings with the boy next door and revealed crucial pieces of the memories I’ve partially repressed. Not only did my parents walk in on us one time (which is how they found out), I apparently also showed my dad my bruised labia; I was physically hurt after all.

So I asked them, what was done about it? Sadly, nothing. We were both small kids. It was hard to get mad at the boy because he was obviously just curious and was probably exposed to inappropriate things in his household and didn’t know what he was doing was wrong. They just decided that after the incident, I was not allowed to play with him anymore.

Back then, I could see why that would have been an adequate response, and I believe it’s the same reason why my father asked if the world needed to know about my experience. It was a time when people kept quiet about indecency, especially sexual indecency at an early age. I also grew up in the Philippines, a country that’s predominantly Catholic. Talking about sex so openly was not really the norm.

These days though, sweeping sexual abuse and its many forms under the rug is no longer acceptable. We read all these news stories about all these Hollywood takedowns and think these famous people have nothing to do with us, we’re not actresses trying to get a foothold in the industry, we’re not dating celebrities and public figures. What we fail to recognize is that sexual assault is a lot more common than you think. It can enter the comfort of your own home without you (or the people who love you) knowing, the same way it did mine.

The simpler approaches can help pave the way for more complex discussions — like what consent looks like and how to have safe sex — when they’re older.

I am raising a baby who will one day become a man. He’s currently at an age when he’s starting to remember and say words we read from his board books, so I think I will get him one that has all the names of his body parts. That way, when he does learn to comprehend and speak in complete sentences, we can talk to him a little bit more openly. I also intend to encourage him to come to me to talk about anything, answer all his questions, and tell him not to be afraid that I might get angry with him for asking. I will teach him to never keep a secret from mommy, no matter how much pressure someone places on him to do so.

There are a lot of effective ways to talk to your kids about sexual assault, and a lot of the simpler approaches can help pave the way for more complex discussions — like what consent looks like and how to have safe sex — when they’re older. Given the resources we have today, we shouldn’t hesitate to pass on to them what we can to ensure our daughters don’t become victims and our sons don’t come to occupy the same space as the men batting off allegations — like Harvey Weinstein, or Kevin Spacey, or Aziz Ansari — or the boy next door, or the man who ignores the word "no."

And no, talking to kids about sex at a young age is not an overreaction. As parents, we have a responsibility to be our children’s first educators. It’s better to view it as a small way of changing the culture.

More Like This
The Best Halloween Family Pajamas To Match Your Boos
How To Tell If Someone Is Lying To You: 34 Signs To Watch For
6 Sex Positions To Reduce Leg Pain
How To Support A NICU Parent, From Moms Who’ve Been There