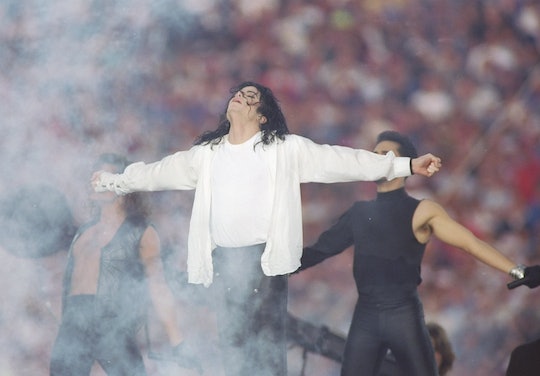 Initially released in Jan. 2018 at the Sundance Film Festival, Leaving Neverland, the four-hour documentary that examines the molestation allegations against the late Michael Jackson, is set to premiere on HBO on Mar. 3 and 4. Now, Michael Jackson's estate has formally responded to Leaving Neverland with multiple statements in attempts to stop the documentary from airing on television, including a lawsuit that could potentially exceed $100 million.

HBO released the trailer for Leaving Neverland on Feb. 19, which explained that the documentary would explore the experiences of James Safechuck and Wade Robson — now 37 and 41 respectively — who allege years of sexual abuse by Jackson when they were young boys. As per the Sundance website, the documentary was made to illustrate "a portrait of sustained exploitation and deception, documenting the power of celebrity that allowed a revered figure to infiltrate the lives of starstruck children and their parents."

After Leaving Neverland's debut at Sundance, Jackson's estate released a letter, claiming that the film was "tabloid character assassination" and that it "takes uncorroborated allegations that supposedly happened 20 years ago and treats them as fact."

The statement continued, per Variety:

These claims were the basis of lawsuits filed by these two admitted liars which were ultimately dismissed by a judge. The two accusers testified under oath that these events never occurred. They have provided no independent evidence and absolutely no proof in support of their accusations, which means the entire film hinges solely on the word of two perjurers.

According to The Hollywood Reporter, on Feb. 8, a statement was sent to HBO chief executive Richard Plepler from the Jackson estate attorney, Howard Weitzman. In the statement, THR claims that the estate asserted that "if HBO cared about ethics, it would not air the documentary."

However, HBO quickly released a statement to THR, defending their decision. "Our plans remain unchanged," the company stated. "Dan Reed is an award-winning filmmaker who has carefully documented these survivors’ accounts. People should reserve judgment until they see the film.”

On Feb. 11, the Associated Press then revealed that Weitzman sent a letter to Channel 4 U.K. claiming that Leaving Neverland violated the network's programming guidelines.

"I think we can all agree that the false allegations being made in your ‘documentary’ are ‘significant allegations'...it is hard to imagine more significant accusations that can possibly be made against anyone," the statement read in the Associated Press. "This includes persons mentioned by name in your ‘documentary’ as having ‘replaced’ Robson and Safechuck as Jackson’s supposed victims of abuse. Those named persons eloquently and publicly deny ever being abused."

Channel 4 has since responded, explaining that because Jackson's past denials are in the film, it meets the network's standards. “On this occasion the person against whom the significant allegations are being made is deceased," the channel wrote, according to the Associated Press. "It is therefore appropriate that his denials during life are included in the program."

As for the individuals involved with the film, Leaving Neverland director, Dan Reed, also responded to the statements released by Jackson's estate, defending his film.

"Anyone who sees the film will know it is solely about hearing the stories of two specific individuals and their families in their own words, and that is a focus we are very proud of," Reed said, per the Associated Press.