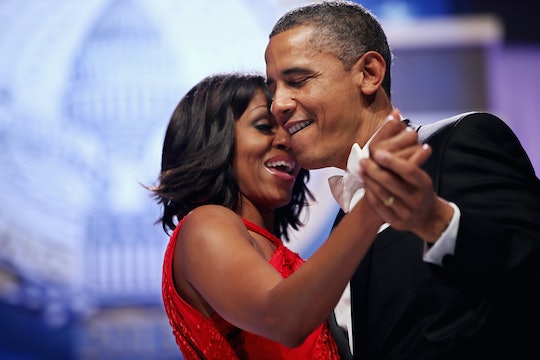 Michelle Obama is currently promoting her new memoir Becoming, and on Saturday night, as CNN reported, she joined moderator and former White House adviser Valerie Jarrett for a talk about her book. In the middle of the talk, Jarret announced a special guest, and before Barack even stepped out, the crowd was already going wild.

The former POTUS sauntered on stage, even doing a dance-y walk for a moment, and gave both Jarrett and his wife a kiss on the cheek. He then presented Michelle with a bouquet of flowers, and gracefully perched himself on the arm of her chair, since there was no seat for him. He kept trying to deliver the opening line that he had clearly carefully planned, but the audience simply wouldn't stop cheering. (And I don't blame them.)

Once they finally did calm down, Barack recited his zinger. "This is like — you know when JAY-Z comes out during the Beyoncé concert?" Barack asked the crowd, according to CNN. He then rapped a line from JAY-Z's verse of the Beyoncé song: "Young B and the R-O-C, uh oh," Barack recited. "Like, 'Crazy in Love,'" he continued, as reported by CNN. "It's the same thing. It's just a little sample to enhance the concert."

Barack stayed on stage for a little while, and he answered a few questions about his wife and their relationship. When asked what about Michelle captivated his heart, and how she has evolved into the woman she is today, Barack told the audience to stay seated, because it would take him quite a bit of time to tell that whole story, which you can watch in the below YouTube video. He said that his first impression of her, based on seeing her photo and talking to her on the phone, was that she was a bit uptight. But then when he picked her up at her house for their first solo outing, things changed.

“First of all, she’s really tall, and most of it was legs,” he told the crowd, as per TIME. “The thing that I remember during that summer as we became friends, before she finally relented to a date, was she was one of a kind,” he added, according to TIME. “You know when you meet somebody and you feel like they get it?”

Michelle and Barack have made their adoration for Beyoncé and JAY-Z apparent on multiple occasions. In July, the former first couple made headlines for attending Bey and Jay's concert in D.C., where fans spotted them bopping to the music, according to Variety. And that adoration goes both ways. Beyoncé performed at both of Obama's presidential inaugurations — in 2009 (she sang "At Last" at his inaugural ball) and 2013 (she sang the national anthem at his inauguration). Plus, Beyoncé and JAY-Z have both campaigned and raised money for Obama's presidential races, as reported by Rolling Stone.

Michelle Obama, Barack Obama, Beyoncé, and JAY-Z are all amazing in their own rights, but the fact that they are all friends with and supporters of each other just makes so much sense. Here's hoping Barack continues pulling JAY-Zs at future stops on Michelle's book tour.

More Like This
Rihanna's First Post Since Giving Birth Confirmed She's Performing At The Super Bowl
Lifelong Teacher Dr. Jill Biden Loves Watching Abbott Elementary Too
The Hocus Pocus 2 Soundtrack Is A Spooky Mix Of Old & New
Serena Williams Shares How Her Daughter Comforted Her After Losing A Big Match