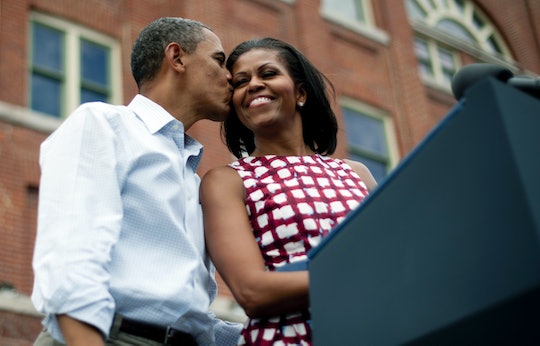 Not only did she share an incredibly sweet old family photo, but Michelle Obama's birthday tribute to her husband Barack on Tuesday also included a beautiful message that's sure to make you blush a little.

President Barack Obama turned 59 years old on Aug. 4 and, just as she does every year, his wife of 28 years took to her social media to wish him a happy birthday. Of course, the Becoming author could have publicly celebrated her husband's birthday when he was a guest on her new podcast last week, but they were too busy sharing sweet and personal anecdotes. For example, at one moment during her podcast, The Michelle Obama Podcast, Michelle said to her husband, "One of the reasons I fell in love with you is because you are guided by the principle that we are each other’s brothers and sisters keepers."

That's not the only reason she loves him, of course. As she wrote in a sweet birthday message alongside a throwback photo with daughters Malia and Sasha, the former president is her "favorite guy."

"Happy birthday to my favorite guy," she wrote on Instagram. "Here's to all the good days, blue skies, and new adventures to come."

In the photo Michelle shared, the couple's youngest daughter Sasha in her dad's arms while their oldest daughter Malia stands in front of them. They are all embracing and smiling in front of an ocean backdrop, looking happy as anything. It was a lovely photo from years ago, especially since their daughters are now grown women of 19 and 22 years old, respectively.

Of course, it's not surprising that the former first lady would call Barack Obama her "favorite guy." For instance, when it came time to wish her a happy birthday back in January, he took to social media with a series of black-and-white photos of the two of them together and called his wife his "star." "In every scene, you are my star @MichelleObama. Happy Birthday, baby!" he wrote at the time. This couple. They really can make a person believe in love.