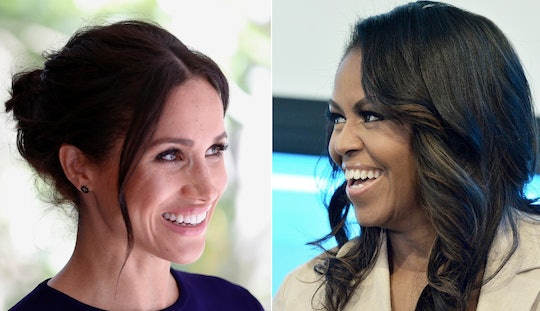 Michelle Obama & Meghan Markle Hung Out Once, Because Some Dreams Do Come True

Before I start to wax poetic about a new best friendship, let me make one thing clear; I have not given up on Meghan Markle and Kate Middleton. I still strongly suspect these two sisters-in-law are closer than any of us might think, feud rumors be damned. But while we all wait for confirmation that they are doing yoga on the grounds of Kensington Palace together, I can tell you that Meghan Markle and Michelle Obama hung out secretly and apparently had a lovely little chat. And that brings me enough joy to be getting on with for now.

The former first lady was in London at the Royal Festival Hall earlier this month to promote her book, Becoming. And Kensington Palace confirmed with HELLO! that the Duchess of Sussex made an appearance at the event "in a private capacity" and the two had a "conversation after the event took place."

Now that I'm thinking of it, a friendship between Michelle Obama and Meghan Markle makes so much sense I'm embarrassed I never made the connection before. Both women with successful careers were thrust into the public eye largely because of the men they married. Michelle Obama was a lawyer in Chicago, Illinois before her husband Barack Obama became the 44th President of the United States, while Meghan Markle was an American actress before marrying Prince Harry in May and becoming a member of the British monarchy.

Michelle Obama actually confirmed that she and Markle had made plans to see each other while she was visiting London and decided to keep it a secret from the rest of us boring people.

In a recent interview with Ryan Seacrest for his radio show On Air With Ryan Seacrest, the former first lady was asked if she knew the Duchess of Sussex was planning to come to her speaking engagement. She confirmed she did and explained, "Yeah, we're used to keeping secrets."

While we don't know specifically what the two women talked about, Obama did tell Good Housekeeping that she had some advice to offer the Duchess about how to navigate her new and sometimes difficult life.

"Like me, Meghan probably never dreamt that she'd have a life like this, and the pressure you feel — from yourself and from others — can sometimes feel like a lot," she told Good Housekeeping.

She went on to recommend that Markle try not to take on too much and give herself time to adjust.

"So my biggest pieces of advice would be to take some time and don't be in a hurry to do anything. I spent the first few months in the White House mainly worrying about my daughters, making sure they were off to a good start at school and making new friends before I launched into any more ambitious work," Obama told Good Housekeeping.

There are very few women in the world better suited to advise Meghan Markle on dealing with intense media scrutiny better than Michelle Obama. I hope the two are finding ways to communicate with each other unbeknownst to the rest of us.