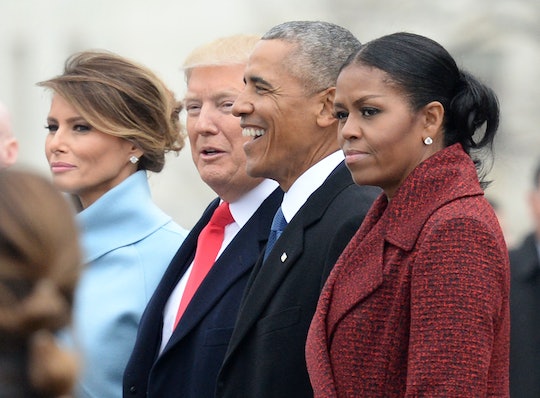 Between the coronavirus pandemic that's kept families across the world isolated from their loved ones, America's distressing history of systemic racism, and the Trump administration's "hypocrisy," Michelle Obama says her mental health has been impacted. Specifically, on the latest episode of her podcast, the former first lady said she's been "dealing with some form of low grade depression."

More Like This
The Obamas’ New Family Rule? Get Vaccinated If You Want To Hang Out With Us
A Private School In Miami Says It Won't Employ Vaccinated Teachers
Everything You Need To Know About Prince Harry & Oprah Winfrey’s Series
Exclusive: Teen Artist Tyler Gordon Reveals The “Ultimate Hero” He Wants To Paint

"Spiritually, these are not fulfilling times," Obama said during the Aug. 5 episode of The Michelle Obama Podcast. "I know that I am dealing with some form of low grade depression."

Obama admitted to her guest, award-winning journalist Michele Norris, that the current coronavirus pandemic, the ongoing movement calling out racial injustices, and the Trump administration's response to it all have taken a toll on her. "Not just because of the quarantine, but because of the racial strife and just seeing this administration — watching the hypocrisy day in and day out is just dispiriting."

"I'd be remiss to say that part of this depression is also a result in terms of what we're seeing with the protests, the continued racial unrest that has plagued this country since its birth," Obama said on her podcast. "I have to say, waking up to the news, waking up to how this administration has and hasn't responded, waking up to yet another story of a Black man or Black person somehow being dehumanized, or hurt or killed, or falsely accused of something. It is exhausting. And it has led to a weight that I haven't felt in my life in a while."

While Obama didn't mention President Donald Trump by name, it's not difficult to connect the dots. As Politico reported, Trump has called protesters who tore down statues of Confederate generals "terrorists." And, in June, Trump said during an interview with Fox News that "nothing has to be said" about George Floyd's death, a 47-year-old unarmed Black man who died in police custody after an officer knelt on his neck for nearly nine minutes. "The George Floyd case, nothing has to be said. I watched that," Trump told Fox News. "I couldn't really watch it for that long a period of time, it was over eight minutes. Who could watch that?"

What's more, in an interview with Fox & Friends on Aug. 5, Trump called Black Lives Matter a "Marxist group" and criticized professional sports players for kneeling during the national anthem. "It's a Marxist group that is not looking for good things for our country and now I see these leagues all kneeling down," the president said.

And when it comes the coronavirus pandemic, Trump has downplayed the seriousness of it for months, even as cases continue to rise and public health officials remain concerned about more outbreaks in the fall and winter. There are currently more than 4.8 million confirmed cases of the coronavirus in the United States, according to data compiled from the Centers for Disease Control and Prevention. Yet, Trump has urged for schools to fully reopen and has insisted that the coronavirus will go away. "I think we're going to be very good with the coronavirus," Trump said during an interview with Fox News in July. "I think that at some point, it's just going to disappear, I hope."

In a survey conducted by YouGov for Yahoo! News, 43% of people said they strongly disapprove of how Trump has handled the coronavirus. What's more, a poll conducted by the Kaiser Family Foundation found that 45% of adults have reported that the coronavirus has had negative impact on their mental health, because they're stressing and worrying about it, so Obama is certainly not alone.

"I'm waking up in the middle of the night because I'm worried about something, or there's a heaviness," Obama shared on her podcast.

Obama added that she is coping by reaching out to others and even turning off her phone every once and a while. "My spirit is lifted when I am feeling healthy, when I am surrounded by good people, so I reach out — I reach out to my family and friends," she said. "Even during this time of quarantine, I fought to stay connected to the people in my life who I enjoy — my girlfriends, my husband, my kids. It's the small things... In the end, if we want anything to change in this world of ours, it has to start with each of us."