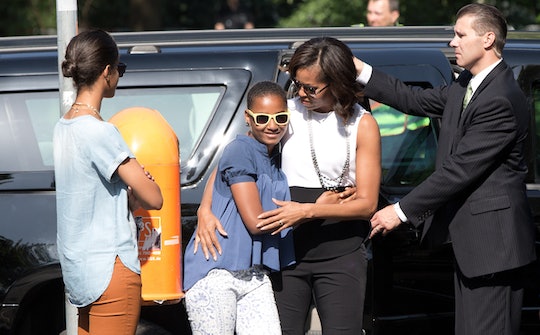 Every year, parents from all walks of life are overwhelmed by a whole bunch of complicated emotions as their kids enter an exciting new chapter of their lives: college. In fact, mom of two Michelle Obama admitted she was emotional dropping Sasha, her youngest daughter, off at college recently. But, as many moms try their darnedest to do, the former First Lady did her best to hold it together.

In a recent interview with Jenna Bush Hager on TODAY, the Becoming author opened up about how it feels to have both daughters leave the nest. The two women were discussing Obama's trip with Julia Roberts to raise awareness about girls' education in Vietnam, so of course the subject turned to her own girls, 18-year-old Sasha and 21-year-old Malia.

Bush Hager asked Obama if she got emotional when she and her husband, President Barack Obama, dropped their youngest daughter off for her first year at the University of Michigan this year. When Bush Hager asked, "Were there tears?" Obama admitted that there were tears from both her and her husband. But she added that they tried to hold it together in an effort not to "embarrass" Sasha.

"We were really good about it, you know," she shared, "We didn't want to embarrass her because she had roommates."

The entire family was on hand to give Sasha a proper send-off for her first year of college, including her older sister Malia, who has been a student at Harvard University since 2017. It seems the tears were held at bay until Sasha said the "final goodbye." As Obama explained to Bush Hager, "When we got into a car ... and then Sasha drove off on her own and said that last goodbye, that's when we were like (crying noises)."

This isn't the first time one of the Obamas has admitted they were weepy when sending their daughter off to school. President Barack Obama compared dropping Malia off at college in 2017 to being "a bit like open heart surgery," according to the BBC. "I was proud that I did not cry in front of her," he said at the time. "But on the way back, the Secret Service was off, looking straight ahead, pretending they weren't hearing me as I sniffled and blew my nose."

Of course, Michelle Obama explained perfectly why sending kids off to college is such an emotional upheaval in her talk with Bush Hager. She said that there is excitement for her girls to discover their independence but, "you feel a little melancholy that they will never be the little ones that sit on your lap and listen to your every word and look at you adoringly. Those days are over."

There are new days to look forward to, of course. But Michelle Obama is exactly right. You never get those days back as a parent and now I'm crying...

More Like This
DeSantis Calls Teacher Requirements "Too Rigid" As Florida Looks To Veterans To Teach
New York Can End Religious Exemptions to Vaccine Mandates, Says A Federal Appeals Court
Pregnant Chrissy Teigen Cracked A Joke About Trump As She Shared A New Ultrasound Photo
Breonna Taylor's Mom Spoke Out About The Four Officers Arrested In Her Daughter’s Death