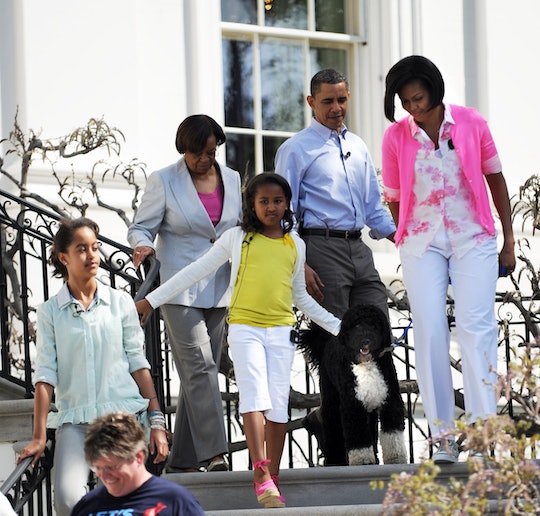 Being a great mom comes from somewhere, and Michelle Obama's Mother's Day tribute to her mom offers a little insight into where she got her own amazing parenting skills. She clearly has heaps of respect and admiration for her own mother and wants to recognize the difference she has made in her life. And yes, this is all making me very emotional.

The Becoming author took to her Instagram feed to share a loving message about her own mother, Marion Robinson, in preparation for Mother's Day on Sunday. Robinson has always been a fixture in the lives of the Obama family, as she lived at the White House when Barack Obama was president for eight years. She helped out with the Sasha and Malia Obama as they were growing up and apparently gave them "laundry lessons" when they were little in an attempt to help them lead normal lives, according to The Seattle Times.

It seems Marion Robinson has a history of imparting wisdom and life lessons. Her daughter Michelle Obama wrote in an emotional post on Instagram, "As we head into Mother’s Day weekend, I’m reflecting on the lessons that my mom taught me and my brother Craig over the years. When we were growing up, she always gave us the space to ask questions and share our ideas."

Obama posted an excerpt from her Netflix documentary Becoming featuring her mother and brother Craig, where she asked her mom, "What did you do to raise two kids? What was your secret?" Her mom answered by saying, "I think I do tell them that there is no secret."

Robinson did note, however, that she "always had fun with my kids. I just couldn't wait to see what they were going to come in and say next. Because it was always something."

Michelle Obama noted in her post that her mother did more than just have fun with her kids (although that is perhaps more important than people might realize). As the mom of two wrote, Robinson "was empowering us to be ourselves, kindling the unique flame burning inside each of us. She laid out the blueprint for how I have raised my own girls."

Barack Obama also looks to his mother-in-law for guidance, apparently. In a birthday message to Robinson last July, he wrote that it isn't just "Michelle and our daughters" who appreciate her wisdom, but him too; "I've always appreciated her steadiness, her perspective, and the way a wisecrack from her reverberates around the room."

The Obamas sound as though they are celebrating Marion Robinson's greatness all year, not just on Mother's Day. And it seems as though she has earned it.