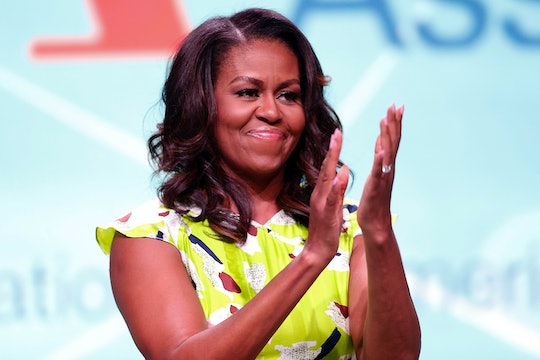 Add one more voice to the chorus of A-list well-wishers eager to welcome the newest royal baby. With news that England now has a new heir to the throne, holding the #7 spot in the line of succession, stars and dignitaries including the cast of Suits, British Prime Minister Theresa May, and Ellen DeGeneres have rushed to express their delight. But Michelle Obama's reaction to Meghan Markle giving birth to Baby Sussex really showcases the special relationship the two power couples have.

The former First Lady shared her message in a tweet on Monday, not long after the world learned that Markle, Duchess of Sussex, had welcomed a healthy baby boy with husband Prince Harry present and mom Doria Ragland on the premises, as Entertainment Tonight reported.

"Congratulations, Meghan and Harry! Barack and I are so thrilled for both of you and can't wait to meet him," Obama wrote on Twitter, adding the hashtag, "#RoyalBaby."

It's no surprise she penned such a sweet message to her friends across the pond. After all, the Obamas have had a longstanding relationship with Prince Harry over the years, as The Daily Express reported, and Michelle took time to visit with Markle when she was in town late last year for her book tour. The Daily Express noted that the two women discussed being in a high-profile position, with Michelle advising the Duchess of Sussex that it takes time to adjust to such a role.

No doubt the Obamas will, in time, be visitors to Frogmore Cottage in Windsor, where the couple is now based, according to Hello! Magazine, which also reported that it is believed Markle had the baby on the estate's grounds.

Adding to the world's excitement about Baby Sussex's arrival, an ecstatic Prince Harry also announced via a video released on his official Instagram account with his wife that the baby was "a healthy baby boy" and "mother and baby are doing well," with the birth being the "the most amazing experience."

The baby weighed 7lbs. 3oz., according to the couple's announcement, and more baby details will follow, as palace officials shared on Monday as well. And, if we're lucky, that's sure to mean a gorgeous photo shoot for royals fans such as myself.

In an extended version of Prince Harry's chat with reporters, as People reported, he noted that the baby was actually a bit overdue and the new family would pose for pictures for the public in a couple of days. Prince Harry also said in the video, as Bloomberg reported, that the couple is still mulling names, which will undoubtedly make all London bookies bonkers until we get to hear the kid's actual moniker.

Meanwhile, while the media and royal fans obsess over the unknown royal baby deets — for instance, who will be the godparents? — I think we forget the point of just being happy for two new, and very deserving, parents.

Prince Harry and Markle seem to care a lot about kids' health and welfare and both have or recall extremely close relationships with their mothers, by everything you can read. And while their famous friends, such as the Obamas, are busy (the Obama's deal with Netflix is bearing fruit with new inspirational content, as ELLE noted), they'll still be only a phone call away if the Sussex family needs some sound advice.

So breathe, guys. Let's all give the new royal party of three a little space. They've got everyone from Oprah making sure their kid will be a bookworm to the Australian officials who gave them baby Ugg boots so the royal tyke can go to yoga in style. These guys are covered. You don't need to worry about them. And with a little patience, everyone will get to see the baby very soon. Including Auntie Michelle and Uncle Barack.