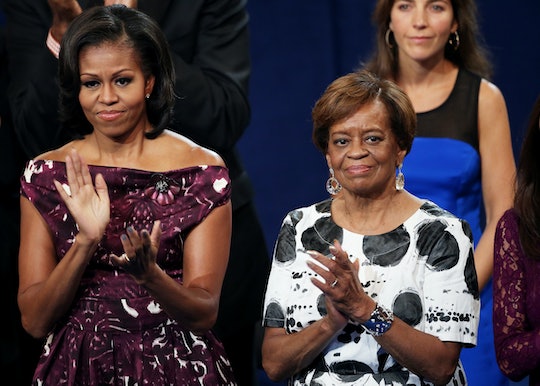 One would think Michelle Obama's mom would be so proud of her, she is bursting at the seams. She's a mother of two, a lawyer, an author, an activist, and oh yes let's not forget the former first lady. And sure, I think her mom probably is proud of her most of the time. But she's not about to allow her daughter to get too big for her britches. After her surprise appearance at the Grammys this past Sunday, Michelle Obama shared hilarious texts with her mom in a post on Instagram, and it's clear she's all about keeping her daughter grounded.

In case you guys don't recognize the name, Michelle Obama is married to former President Barack Obama (oh how lovely to type that again) and the author of the massively popular book Becoming. She is a style icon, a former lawyer, and apparently a really supportive friend. When recording artist Alicia Keys was hosting the 2019 Grammys on Sunday night, Obama stopped by to support her.

"For me, a big part of friendship is showing up for your girls — whether that’s for a birthday, a quick catch-up after work, or a major milestone," she shared in a post on Instagram. "So I was thrilled to be there for the one and only @aliciakeys at the #GRAMMYs. She is one of the most genuine, caring, and thoughtful people I know — there’s no one better to help us all celebrate the unifying power of music!"

Obama was up on stage with Keys, Jennifer Lopez, Jada Pinkett Smith, and Lady Gaga. Talk about star power. Impressive, right? Not to everyone, apparently.

Obama's mom Marian Robinson appeared less than impressed in a text exchange her daughter shared on Instagram with her 26 million followers. It seems Robinson wasn't informed, or remembered, her daughter would be on television that night. And she let her know in the most mom way possible, also known as subtly passive aggressive. My favorite tactic.

Robinson wrote, "I guess you were a hit at the Grammys" because she apparently didn't remember being informed her daughter was going to be a guest star.

Obama responded in what I consider a pretty typical daughter way, too: "I told you I was going to be on it." Classic defensive maneuver that almost never works.

But here's the best part: Robinson asked her incredibly famous, iconic daughter if she happened to meet any "real stars" at the show. Obama pointed out that she is, too, a "real star," and her mother responded with one word: "Yeah."

I think this exchange offers us a real behind-the-scenes glimpse at how Michelle Obama has managed to stay so grounded over the years. Through meeting heads of state, royalty, musicians, actors... you know, real stars.

After all, Robinson lived in the White House with the Obamas during their administration, and she once told CBS This Morning that she considered her role in the household to help maintain a sense of normalcy for the couple's daughters, Sasha and Malia. I get the feeling she had no problem extending that down-to-earth realism to her daughter as well.

That's the thing about moms: we were there before you were cool. And we don't mind reminding you in case you start believing your own hype.