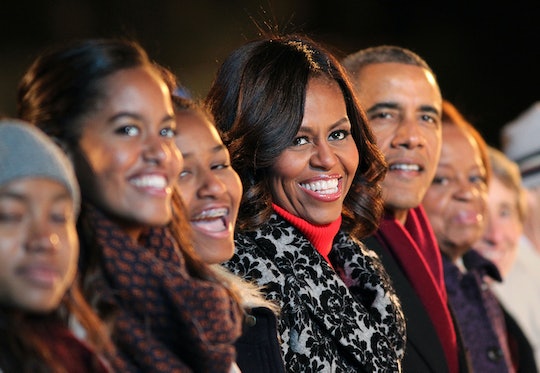 Feb. 14 is all about celebrating the people you love, and of course few people are better at doing that than the Obamas. The former first family are presently adorable, and Michelle Obama's Valentine's Day message to her "loves" proves that not only are she and her husband still going strong after almost 30 years of marriage, but the whole family unit is solid as a rock.

Michelle and Barack Obama have been married since 1992. They weathered two terms in the White House, which could not have been easy. They raised 21-year-old daughter Malia and 18-year-old daughter Sasha during those years and have now watched them head off to college. But through it all they've stayed unwaveringly strong. And every year both the Becoming author and her husband take a time out on Valentine's Day to celebrate each other. Last year, for instance, Barack Obama shared a photo of himself dancing with his wife where they both looked impossibly glamorous and cool with the message, "Happy Valentine’s Day to the extraordinarily smart, beautiful, funny, one and only @MichelleObama. It’s true; she does get down to Motown." She shared a photo of the entire family curled up together during their White House years with the message, "So lucky to call these three my valentines for all these years." Both photos were romantic and sweet and even a little fancy. This year, however, Michelle Obama went a different route. A photo of Barack, Malia, and Sasha playing in the snow with the caption, "Happy Valentine's Day, my loves. You make even the coldest days feel warm."

The transition from being busy parents of two girls in the White House to private citizens and empty-nesters must have been difficult, but as ever the family has found their way. As Michelle Obama told People in 2019:

"We are finding each other again. We have dinners alone and chunks of time where it’s just us — what we were when we started this thing: no kids, no publicity, no nothing. Just us and our dreams.”

As for Barack Obama, it seems he's pretty much just happy that his wife is still his "forever dance partner," as he wrote in his own Valentine's Day message on Instagram.

The Obamas continue to be the gold standard for people who prioritize their mutual love and respect for each other after being together for more than 27 years.

I don't want to say #relationshipgoals because it's old-fashioned but... well, yes.