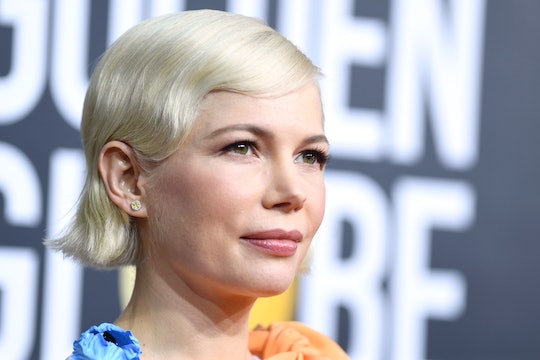 Michelle Williams Spoke For Women Everywhere At The Golden Globes

Michelle Williams started making headlines at the Golden Globes the moment she hit the red carpet in a gorgeous, golden gown — pretty much the embodiment of that elusive "pregnancy glow" all moms-to-be are supposed to have. But it was Michelle Williams' Golden Globes acceptance speech that's going to be remembered in the weeks and months ahead.

Williams won the 2020 Golden Globe for Best Performance by an Actress in a Limited Series or Motion Picture Made for Television for her role as Gwen Vernon in the FX series Fosse/Verdon (as her bestie Busy Phillips looked on, nearly bursting at the seams with emotion). The actress was widely praised for her passionate speech about equal pay and women's rights when she won the 2019 Emmy award for Lead Actress in a Limited Series/Movie for the same role, so expectations were high when she took the stage. Of course, she did not disappoint. With her trademark grace and eloquence, Williams used her time in the spotlight to speak out on behalf of millions.

“I’ve tried my very best to live a life of my own making and not just a series of events that happened to me, but one that I can stand back and look at and recognize my handwriting all over,” she said. “Sometimes, messy and scrawling, sometimes careful and precise. But one that I had carved with my own hand, and I wouldn’t have been able to do this without employing a woman’s right to choose.”

“To choose when to have my children and with whom, when I felt supported and able to balance our lives, knowing, as all mothers know, the scales must and will tip towards our children,” she went on. “Now, I know my choices might look different than yours, but thank God, or whomever you pray to, that we live in a country founded on the principle that I am free to live by my faith and you are free to live by yours.”

At this point, everyone in the audience looked pretty much like this:

Williams then made a heartfelt plea to viewers:

“So, women 18 to 118, when it is time to vote, please do so in your own self-interest. It’s what men have been doing for years, which is why the world looks so much like them, but don’t forget we are the largest voting body in this country. Let’s make it look more like us.”

Let's hope that all the women watching Williams tonight listen to her words and take them to heart. Let's make it more look us. (And like a verklempt Busy Philipps.)