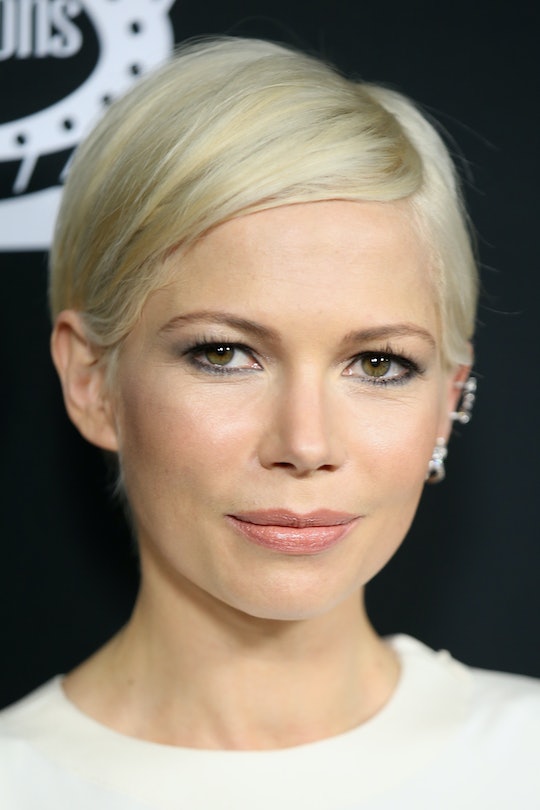 It's been eight years since her former partner, Heath Ledger, died, but Michelle Williams' comments about single mom life are no less heartbreaking. They're also a good reminder that some pain doesn't ever go away. Ledger and Williams's daughter Matilda, who was born in October 2005, is now 11 years old. And for the mom of one whose ex-partner's loss still weigh's heavily on her, it's a strange feeling.

In an interview with Porter magazine, Williams said that parenting alone can be tough. “In all honesty, for pretty much everything else, I feel like I’m a believer in not fighting circumstances, accepting where you are and where you’ve been,” she said. Williams added, “In pretty much all senses but one, I would be able to go totally down that line of thinking, were it not for Matilda not having her dad. You know, that’s just something that doesn’t ... I mean, it just won’t ever be right.”

Williams and Ledger met on the set of Brokeback Mountain in 2004 and were separated at the time of his overdose and untimely death in 2008. Prior to his passing, however, Williams and Ledger had remained close, largely because of their daughter. Williams said that strength in numbers has helped her cope. “I know a handful of women in similar positions [to me], it’s kind of like a club. It’s a sh---y club and we don’t want any new members … and all the current members are exhausted. But man, oh man, it’s lifesaving to have [them].”

Like other single moms, and after dealing with the accidental overdose of her co-parent, the weirdest thing for Williams has been getting back into the dating scene, she told Porter. "This is not what I imagined. I’m like a cat, I’m a very domestic creature. I just want to stay home and take care of people," she said. "But I’m also happy with myself and just because I might have a desire to be with someone … that won’t lead me to marry the wrong person."

Dating is not easy for anyone, but perhaps it's even more difficult for single mothers, according to Williams. "Talk about a learning process. I think, God, what would I say about it? I feel really sensitive about it," she said.

Although it sounds like it's difficult for Williams emotionally, it's totally soothing to hear her say those words out loud and not put on some stoic show. Sometimes hearing someone else just admit that life can be really, really hard is all anyone needs.

Far too often, it seems like women hold back from being too vulnerable so they seem "strong" — but what's really strong is looking around now and again and going, "How the heck did all of this happen?" Talking about that feeling is the healthiest thing to do.

She may struggle with the ins and outs of coping with a tragic loss, even all these years later , but it sounds like Williams probably has nothing to worry about in terms of raising Matilda to be just as brave as her mother.