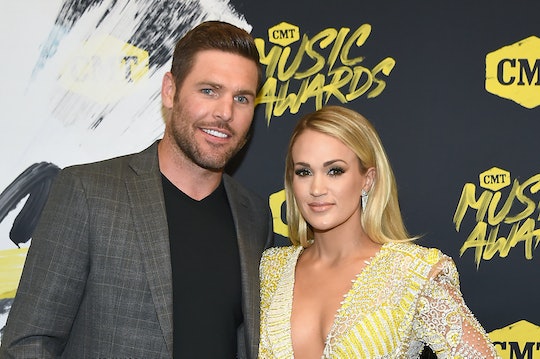 Carrie Underwood finally gave birth to her long-awaited second baby, Jacob Bryan Fisher, nearly two weeks ago, and the country star appears to be in heaven with an expanded family that includes 3-year-old big brother Isaiah. As does her hubby, who has been vocal about their family's joy. In fact, Mike Fisher's adorable quotes about wife Underwood prove that they are the original #Couplegoals.

The couple, as People noted, welcomed their new baby just over a year after a serious fall outside their Nashville home required the singer, 35, to endure 40 to 50 facial stitches and undergo surgery on a broken wrist.

The magazine noted the singer's latest album, Cry Pretty, was released just before she hosted the Country Music Awards for the 11th time last fall, after having announced her pregnancy in August on Instagram.

With the past few years having been not exactly easy for the couple — in addition to her fall, Us Weekly confirmed that Underwood suffered three miscarriages — it's totally their time to revel in their hard-won happiness.

"I feel so blessed. It took us a while to get here," Underwood told Us Weekly before giving birth to Jacob. "[I’m] just so thankful to find out Isaiah’s gonna have a brother. It was just great news. We're excited."

Fisher's ongoing support of — and praise for — his wife, during all their travails is just really touching, and there's no shortage of evidence that these two have had quite the love story over the years.

When He Supports Carrie As A Mom:

Fisher is always complimenting his spouse as a caregiver, an important trait when there are young kids at home and so much of the infant parenting, including breastfeeding, is falling to the mom. "So grateful to have these 2 Awesome moms in my life! #happymothersday," Fisher posted last Mother's Day, before going to a pic of Carrie with Isaiah, then another of his own mom (and note the order of appearance there, my friends, wife first).

When He Supports Her Career & Work:

Fisher isn't one of those guys who has a need to shine brighter than his partner, consistently praising Underwood's career and drive: "This album is unreal and my favorite to date! So proud of @carrieunderwood for all the hard work she put into it!!" he wrote when her new album dropped in the fall.

"God has given you one of the best voices, crazy work ethic and platform you’ve never taken for granted. You’ve remained humble in all the success and never craved the attention or fame one bit. Thanks for always being the small town girl from Oklahoma even thou your one of the biggest stars!" he posted when his wife was inducted into the Oklahoma Hall of Fame.

When He Puts Her First:

As Country Living magazine reported, when Fisher and Underwood first got together, Fisher was living and working in his native Canada, and the two were committed to having a commuter relationship. But when Fisher was given the opportunity to leave Ottawa to join the Nashville Predators hockey team in 2011, he was willing to give up everything he'd ever known... for love, despite the fact that fans might be upset about the decision.

"Stuff happens and I’m learning that with all the attention that’s paid to her – because of who she is – to not worry about those things that are not true," Fisher said at the time, according to People. "It’s what you have to do, it’s the life we’re a part of now and obviously there’s a lot of good things that go with it, too."

When He Makes It Clear He Still Thinks She's Hot:

Almost nine years of marriage, two babies and several tragic miscarriages, Fisher and Underwood appear to have a mature love for each other that's been strengthened through life's challenges. But you know a marriage has still a little sparkle when a husband still thinks his wife is, well, hot, and here, Fisher's Instagram is all the evidence you need.

"Date night with my better half!," he posted back in August, after calling his wife "babe" in another cute shoutout. Elsewhere on social media, he's complimented Underwood's hair or complimented her red-carpet looks with a "holy smokes!" In other words, he still treats her like a newlywed. Impressive.

As the family no doubt settles in with the new addition — "Our hearts are full, our eyes are tired and our lives are forever changed. Life is good," Underwood posted after the baby's birth — it's nice to see a family this overjoyed with their blessings. And there's no doubt that when Underwood kicks off her upcoming tour in the spring, she will have the steadfast support of her spouse.