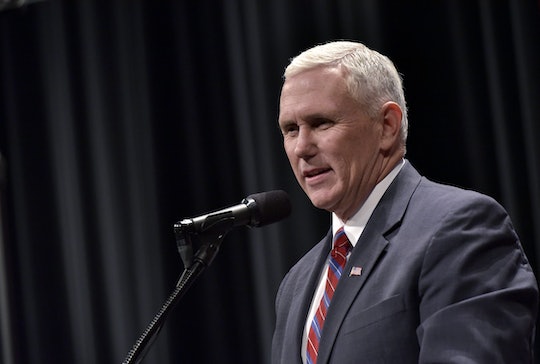 It might never be known what caused Pence to squint during the debate, held at Longwood University in Farmville, Virginia. Both candidates were equally as expressive with their faces and body language, using hand gestures and strange tics to drive home certain points and emphasize what they were trying to say.

There was no denying that both candidates' facial expressions were important to watch to understand the whole picture, just as their positions on issues were hugely important to listen to. Between Kaine's smile and quizzical eyebrows and Pence's wide-eyed, frustrated looks into the camera (hello, Jim from The Office), the vice presidential debate was truly a spectacle. However, despite all the one-liners and hilarious expressions displayed by both men, it seemed as if people simply could not let go of Pence's squinting for some reason.

Twitter was busy throughout the night, talking about Pence's exhausted squinting (and what, specifically, may have brought it on):

Believe it or not, squinting actually helps some people see better. According to Wired, the act of squinting reduces excess light from other sources, therefore making the object that someone happens to be focusing on at least temporarily clearer. Squinting, Wired reported, is the same thing as "making a small hole with your finger and thumb and then holding it up to your eye." While the act does not actually magnify the point of focus, it does block out everything in the peripheral vision, making the point of focus the only thing to look at.

That being said, perhaps Pence wanted to focus on Tim Kaine's eyebrows. Whatever, the case or point of focus may be, I hope that Pence was able to see it more clearly:

Kaine and Pence's stances and arguments on the issues were incredibly important and captivating, and body language and facial expressions can sometimes prove to be difficult to control. And at the end of the day, no matter which candidate was able to roll out the best one liners or the most effective policy arguments, it's safe to say that Mike Pence's eyebrows pretty much won the social media war.