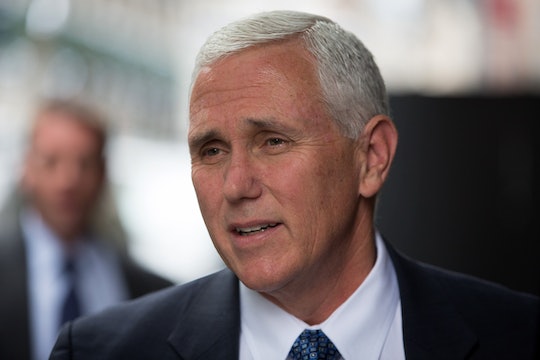 Mike Pence's Quotes About Working Mothers Are Archaic, But He Says His Views Have Changed

Donald Trump and Mike Pence represent a duo that has consistently challenged and belittled women, whether that means with denial of the sovereignty of our bodies through attacks on access to reproductive care or admissions of the belief that women belong almost exclusively in the home. The president-elect and his veep have been unabashed for decades about asserting the latter, with Trump at one point saying on national television that "putting a wife to work is a very dangerous thing." And Mike Pence's quotes about working mothers are no better, espousing the archaic view that putting children in day care is the sin of a mother alone — an apparently long-held stance that Pence has since said has evolved.

In a 1997 op-ed published in The Indianapolis Star, when the current governor of Indiana and soon-to-be vice president was an opinionated radio personality, he wrote that mothers who put their kids in day care were contributing to the "stunted emotional growth" of a generation of adults. "For years, we have gotten the message from the mouthpieces of the popular culture that you can have it all, career, kids and a two-car garage," Pence wrote, also insinuating in the piece that the government should develop a tax code that incentivized "one parent" to stay home with the kids. "... Sure, you can have it all, but your day-care kids get the short end of the emotional stick."

Pence wrote the piece in response to a study that found that, while kids in day care don't have cognitive disadvantages, they may display less affection toward their mothers. Pence wrote that he does not mean to go around "condemning" families who put their kids in day care. Instead, he's "criticizing a culture that has sold the big lie that 'Mom doesn't matter.'"

In the time that has elapsed since he penned this op-ed, Pence has ascended from local talk radio to the highest realm of state government, poised to be just one heartbeat away from assuming the presidency. And with that rise in power and prominence came scrutiny of his past, which is why the media unearthed the day care op-ed in July. At the time, Pence did not respond to major media outlets like CNN and The Washington Post about whether he still believed his words of 1997, but, at the end of September, emerged on Face The Nation shortly after Trump unveiled his own presidential childcare plan to say that his previous views have changed.

"I strongly support the reforms in taxes and in the benefits that will make it possible not only for maternity leave but for families to fully deduct the cost of childcare," Pence told host John Dickerson in an interview, according to CBS News.

Perhaps Pence is simply getting with the times on this — The New York Times, for example, recently reported that there is a growing body of evidence that being a child of a working mother comes with myriad advantages. In the United States, for examples, women who grew up with mothers who worked earned on average 23 percent more than their counterparts who had stay-at-home mothers, and in the broader tapestry of the 25 countries that the Pew Research Center analyzed, they were more likely to have supervisory roles.

That's not to say, though, that Pence has pulled a total 180 on this issue. He specified that he supports maternity leave, not paternity leave, in his comments on Face the Nation, just as Trump's much-touted proposed child care plan would offer six weeks of parental leave to mothers, but not to fathers.

Of course, a politician's stated position on an issue like child care is more indicative of opportunism and political maneuvering than what he feels in his heart of hearts. Pence has shown over and over again how he views women — whether to believe what he says is up to us.