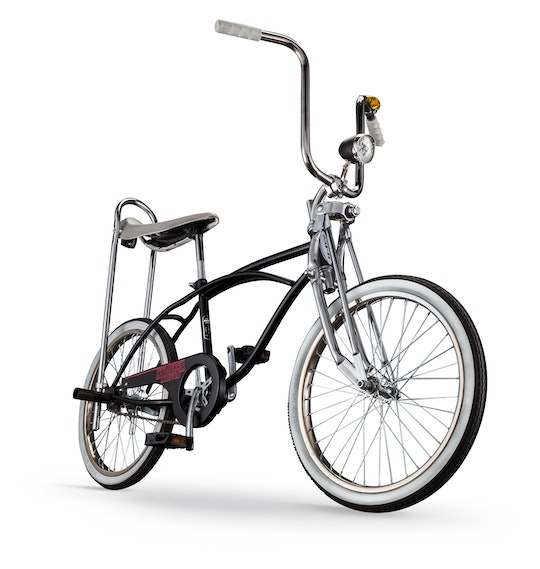 Are you a fan of Stranger Things? Of course you are. If you've seen even one episode of the hit Netflix series, then I know you're hooked. And chances are, if you love watching Mike, Eleven, Hopper, and the gang battle the Upside Down, then you also love all the '80s nostalgia pumped into the show from every angle. Seriously, it's like comfort TV for me at this point, and Mike Wheeler's Schwinn bike from Stranger Things really does it for me. I had an ancient Schwinn that I rode until it literally fell apart as a kid, so if you're lusting over Wheeler's ride, there's good news — you can totally order one for yourself.

But it's not as simple as heading to Amazon for some Prime shipping. In an effort to remain as pure as possible to the time period, and to the show, Schwinn is taking it back really old school. There is a limited number of the replica bikes available — only 500 — and if you want one, you're going to have to grab your phone and dial 1-800-SCHWINN. Yup, you're going to have to get over your millennial phobia and do things the old-fashioned way. The phone lines opened at 11 a.m. EST June 4, and honestly, the entire ad for this bike reminds me of every magazine I opened as a kid and every infomercial that said "please ask your parents for permission before calling" or "must be 18 or older to order."

And when I say this bike is a true replica of Mike's, I mean it. Just look at the beauty. The light on the handlebars actually works, and for those who can't get enough of Stranger Things, the show's logo is on the chain guard and there are other "Easter eggs" of the show located on the bike. Seriously, if it was actually the 1980s, you'd be the raddest kid on the block with this bike. But instead, it's 2018 and... well. You're still going to be the raddest kid on the block. Except now you're an adult and have replaced bread with cauliflower and spend way too much time on Twitter.

In a press release about the release of Mike's bike, Milissa Rick, senior director of marketing at Schwinn, made a really valid point about the bicycles feature on the show. "The bikes featured in Stranger Things have almost become their own characters. These retro bikes are the kids' primary form of transportation — taking them towards adventure and away from danger." And it's true. There's a huge wave of nostalgia over a great bicycle, too. Do you remember how important it was to have the cool bike in your neighborhood? How you'd add streamers or clothespins or baseball cards to the spokes of the wheel? How your bell had to work, and if you had a light on your handlebars, you were basically driving a kid Cadillac? Now kids don't seem to get through the world on a bicycle like the rest of us did, but you can definitely pretend like the good times are still here with this Schwinn replica.

Featuring a banana-style saddle, classic high-rise ape bars, rear "sissy" bar, rear pegs, coaster brake, and a springer front suspension fork, the Mike's Bike from Schwinn retails at $379. Whether you plan to ride it (you better) or just want it as a prop to show off your love for Stranger Things, you'll want to act fast. With only 500 made, chances are they're going to go fast. And then how are you supposed to save the entire town of Hawkins, Indiana from the Upside Down?