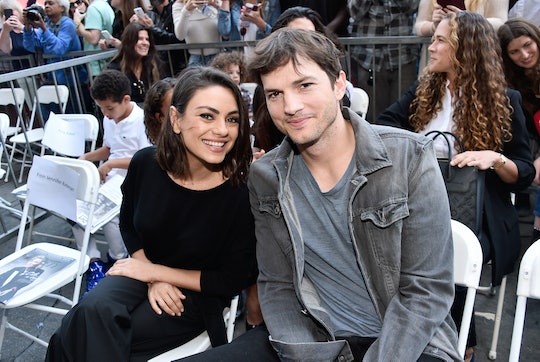 Mila Kunis and Ashton Kutcher are "breaking up," claims the celebrity rumor mill that refuses to shut down. Now, if that rumor were true, would be heartbreaking. The couple have two children and not only have they been romantically linked for years, they've known each other for decades since they first met filming That 70's Show in 1998. But if this rumor was surprising to hear, you're not alone — it was surprising to the couple, too. Kunis and Kutcher responded to split rumors with a hilarious video and I really hope that puts an end to all the nonsense.

The Bad Moms star and her husband, Kutcher, have been married since 2015 and have two children together, 5-year-old daughter Wyatt and 3-year-old son Dimitri. But of course, their relationship history goes back as far as 1998 when they played teen couple Jackie and Kelso on That 70's Show. At the time Kunis was just 14 while Kutcher was 19, so they started out with more of a brother/sister relationship. They both had serious relationships with other people (Kutcher was married to Demi Moore until 2012 and Kunis dated Macauley Culkin until 2011), but they developed a strong foundation for a lasting relationship over the years through friendship and trust, as per Insider. That is, until tabloid news outlet In Touch Weekly decided their entire relationship was over.

Unfortunately, Kutcher and Kunis didn't appear to be part of that particularly important decision, according to a video the couple shared on Kutcher's Instagram feed on Wednesday.

In the video, Kunis is looking at her phone in the couple's car when she sees the cover story with a picture of the two of them and the caption "It's Over."

She gives him the bad news; "It's over between us."

He responds with mock panic, "Oh my God, what are we going to do?"

Kunis notes that she reportedly feels "suffocated," and that she has taken the two children which, yet again, was a surprise to her husband. As was the fact that In Touch Weekly reported that he had a dark secret to expose. When he asked the Friends With Benefits star what that dark secret might be, she didn't know. "It must be really dark," he surmised.

Just in case there was any further doubt that this couple is still happy and going strong and raising their children together, Kunis shared this cryptic caption for the video on Instagram:

I guess it’s over @intouchweekly have fun selling magazines this week. Maybe next week my wife will be having twins. For the third time. But who’s counting.

As hilarious as this video is, it's also an important step in the right direction when it comes to fighting back against fake news. Because these type of stories could be potentially damaging to a couple if they went unchecked, and whether you're famous or not no one wants split rumors invading your actual real life, do they?

Kudos to this great couple, going strong after two decades of knowing each other.