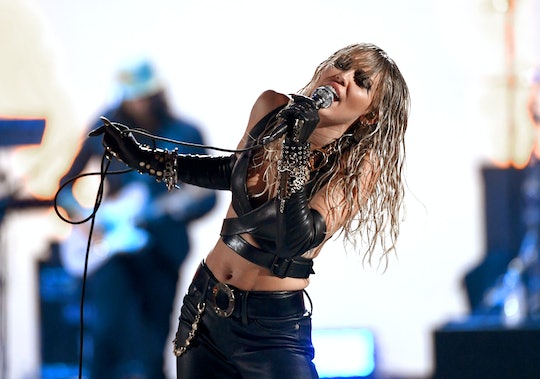 If you're like me and fell in love with Miley Cyrus and Liam Hemsworth as a couple on The Last Long, then you were likely devastated by news of their split. Still, live isn't a movie; relationships change, and sometimes things just don't work out. Both Hemsworth and Cyrus have been spotted with other people since the divorce papers were filed. And recently, Miley Cyrus expertly clapped back at dating double standards.

It all started — at least publicly — back in August when Cyrus and Hemsworth announced their split, according to People. “Liam and Miley have agreed to separate at this time,” a rep for Cyrus told the publication in a statement. “Ever-evolving, changing as partners and individuals, they have decided this is what’s best while they both focus on themselves and careers. They still remain dedicated parents to all of their animals they share while lovingly taking this time apart. Please respect their process and privacy.” Not long after that, Liam officially filed for divorce, citing "irreconcilable differences," TMZ reported.

Now that everything is out in the open, and the first steps of divorce have been taken, you'd think that people wouldn't freak out every time one of them is spotted getting romantic with someone. But alas, the masses have decided that it's apparently "too soon" for Cyrus to be dating around. And the "Mother's Daughter" singer is having none of this double-standard nonsense.

Since parting ways with Hemsworth, Cyrus has been spotted getting intimate with former The Hills star Kaitlynn Carter. Most recently, though, she's been linked to Australian singer Cody Simpson. An Instagram Story posted on Friday, Oct. 4 showed Simpson kissing Cyrus on the cheek, according to BuzzFeed News. Cyrus and Simpson were reportedly getting breakfast at a cafe when this PDA went down and more, Us Weekly reported. "Pre swim breakfast courtesy of baby," he captioned the photo. Cue: People lost their ever-loving minds.

Cyrus didn't take the criticism sitting down, though. “Men (especially successful ones) are RARELY slut shamed,” Cyrus tweeted on Friday. “They move on from one beautiful young woman to the next MOST times without consequence. They are usually referenced as ‘legends’, ‘heart throbs’, ‘G’, ‘Ladies Man’ etc…..where women are called sluts/whores!" She continued:

I am trying to just THRIVE/survive in a ‘mans’ world….if we can’t beat em, join em! If our president can ‘grab em by the pussy…’ can’t I just have a kiss and açaí bowl?!?!

In case you were wondering, Twitter seemed to dig her sentiments as well. One person declared, "Miley Cyrus is the ultimate feminist role model."

Another Twitter user commented, "SAY IT LOUDER FOR THE PEOPLE IN THE BACK!!!"

Yet another person wrote, "Omg a kiss and a acai bowl iconic! Stream the man by Taylor swift."

You know what? I say good for Miley. Breaking up sucks — and I would imagine dating while in the public eye is rough, too. There is no required amount of time for Hemsworth or Cyrus to sulk and hide away at home before they're allowed to see other people. So enjoy that açaí bowl, and revel in the PDA. Because you don't need anyone's permission.