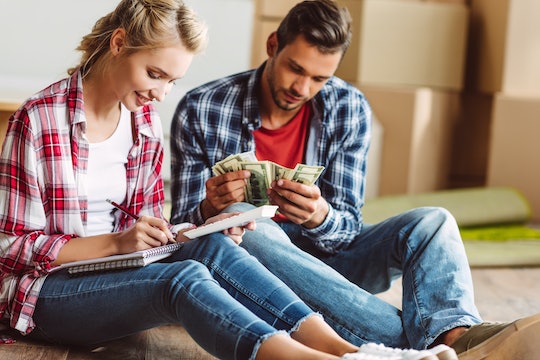 Millennials have a bad reputation among older people that just assume the younger set doesn't know what they're doing, especially when it comes to financial responsibility. But a new survey done by Nerd Wallet found that millennial parents could be $1 million richer than their own parents if they keep doing what they're doing.

The survey looked at 2,000 American adults over 18 years old and 1,112 of them were parents and their saving habits. Out of all of them, 1,677 reported that they were saving for retirement. According to the research, 38 percent of employed parents contribute more than 15 percent of their annual income to retirement savings, which is way more than the 24 percent of Gen X parents and 23 percent of Baby Boomers who do the same thing, according to MarketWatch.

If millennials keep up the good savings habits, they could actually retire with $1 million more than Gen X parents and $400,000 than Baby Boomers. That's a lot. The Nerd Wallet researchers wrote, "Despite being earlier in their careers and having lower incomes … millennial parents may be out-saving parents of every other generation in terms of retirement." So everyone can quit worrying about all that avocado toast.

Being a parent helps, according to the study. Non-parent millennials are not saving as much as their peers who have kids, which sort of makes sense. Once you have a family, the future all of a sudden becomes a more tangible thing to start saving for. But this is true for all age groups. Despite the expenses associated with having kids, according to the survey, 84 percent of employed parents say that they're saving for retirement compared to just 69 percent of non-parents.

Parents are also way more likely to call retirement saving a priority than non-parents. Only 49 percent of non-parents describe it that way as opposed to 60 percent of parents, according to Nerd Wallet.

Then again, saving for retirement is not easy and neither is setting aside more than 15 percent of your annual income for some families. That's a lot of cash to put aside if you're living paycheck to paycheck or are trying to pay down credit card debt or student loans. It's stressful. The survey writers found that most employed millennial parents that they talked to were ready to sacrifice in the name of retirement.

According to their research, 76 percent of millennial parents say they've sacrificed to put dough in their retirement funds, while only 69 and 60 percent of Gen X and Baby Boomer parents, respectively, said the same thing. Respondents said that eating out, upgrading to a bigger home, going on vacation, and even waiting to have more kids are all sacrifices they've made in the name of saving for retirement.

If all of this is making you break out in hives, you are not alone. Planning for retirement is a daunting savings goal, especially when there are things that your family needs right now. Of course, most parents are willing to sacrifice for retirement and consider their future important, it can just be literally impossible sometimes given your income situation.

The experts at Nerd Wallet recommend some small tweaks to how you think about saving for retirement to make it happen, one of which is to stop considering saving for your kids' college tuition more important than saving for retirement. It's not actually: There are ways for kids to figure out how to pay for college later on, as TIME noted, and you'll be doing everyone a bigger favor by preparing for retirement so that they don't have to take on any financial responsibility for you later in in life. Makes sense right?

However you start saving, you're definitely not alone if it feels stressful and tough. But, according to this study at least, it will definitely pay off in the end. And you can gloat to your parents that you're actually doing something better than they did. That's sort of worth it.