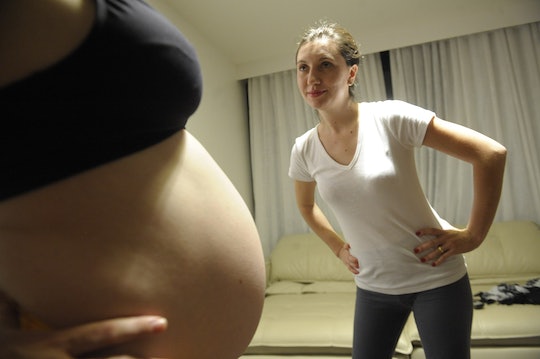 Millennials Are Becoming Doulas In Droves. Here's Why.

Mary Pope, a 30-year-old mom of two in the Kansas City area, didn't know what a doula was when she had her first child, much less that she would soon become one herself. "I had a hard birth experience and struggled with postpartum depression," she says. "When I learned that there was a specific field of work that assisted women in that, and their sole purpose was to improve the experience of other women, I felt that it was just the right thing for me."

Pope isn't alone. In a country where most people still don't know what a doula is, more and more women are becoming doulas, and most of them are under 35.

As Pope discovered, Doulas are non-medical birth workers who support expecting, laboring and new moms. Some doulas primarily attend births, while others may spend time in the homes of new moms helping with anything from meal prep for the family, changing diapers, or offering breastfeeding coaching. Although this kind of support is common in cultures outside the U.S., here's it's mostly absent, and thousands of young women are looking to change that.

Just a few minutes spent on social media is a good indicator of how popular this career path has become among millennials. I'm 28, and I've seen birth work explode among my friends. Just last week, one of them, a 20-something mom of three, announced she is training to become a birth educator while another is rebranding her doula business since recently adding placenta encapsulation to her repertoire of doula services.

This isn't just some crunchy trend overtaking my local moms group, like essential oils and dubious weight-loss wraps. It's bigger than that. Prodoula, a New York City-based company that has been training and certifying doulas since 2008, trained 1,600 new doulas in 2016. Sixty-five percent were between the ages of 18 and 30. Randy Patterson, Prodoula's founder and CEO, says that overall, 70 percent of Prodoula-trained doulas are millennials.

“It makes sense that [younger women] are attracted to this work,” says Patterson. In her experience, millennials in general are more driven by their own experiences than material rewards. That carries over into their motivation for becoming doulas. "Birth is the most transformative and powerful life experience there is,” she says.

Technically, anyone can practice doula work. There are no official, nationwide standards regulating who does and doesn’t offer support during labor and delivery or postpartum. However, there are companies that set industry standards and offer certification. Prodoula is one. Currently most doulas get certified through DONA International, an organization that has set the standard for training certification and staying up-to-date on developments in the birthing industry. Training companies obtain DONA approval to train new doulas. Birth or labor doula training and certification can entail over 16 hours of in-person classes, a childbirth education course, a short breastfeeding education course, reading, an essay, a self-evaluation, and three experiences supporting a client through labor. Postpartum doula training is separate but similarly involved.

The motivation for pursuing a career as a doula seems to be different for each doula, but for those who are already mothers, it often seems to come back to what happened when they gave birth.

For Stephanie Darling, 32, a birth tragedy led her to the realization that many healthcare workers simply don’t have the bandwidth to care for the emotional well being of mothers.

“In 2011, I lost my newborn son to kidney failure after a month of fighting for his life in the NICU,” Darling tells me. “On a routine postpartum visit to my OB-GYN, my doctor asked, 'How is your son doing?’ and my response was simple: ‘He's dead.’ My doctor was a nice man and a highly respectable doctor, but he was also very busy, and my traumatic situation was just a blip on his radar.”

This experience was a first glimpse into how void of personal support obstetrics can be, but it was Darling’s second child’s birth that ultimately led her to seek out doula certification.

My primary reason for becoming a doula was because there are very few birth workers of color... I saw a need that wasn't being met and figured I should do my part.

“I was recovering from a cesarean in my hospital bed and looking at my newborn daughter next to me, swaddled in her very tall and hard to reach hospital baby bed. I could barely sit up, let alone retrieve my hungry baby up out of her bed. I laid there, in my dark hospital room, crying, feeling defeated and wishing I hadn't sent my mom home early.”

Darling made it through those first several days, full of breastfeeding difficulties and sleepless nights, only because she broke down and asked her mother to come back for a second visit. A few months later, at the advice of a friend, Darling was pursuing doula certification hoping to be an advocate for new mothers who need support beyond basic medical care during and after birth. Today, she has six years of professional labor and postpartum doula experience under her belt.

Although Darling’s first birth experience is a tragedy most mothers will never experience, a difficult postpartum recovery, like hers after the birth of her second child, isn’t all the uncommon. In fact, for many young moms, this is the exact experience that leads them to doula training in the first place.

“For those who had a less than positive experience, we find they desire to become doulas to help prevent others from feeling the same way,” explains Patterson. “It was terrifying. They were in pain and felt unheard and unsupported.”

“My primary reason for becoming a doula was because there are very few birth workers of color,” says Jumesha Wade, 29-year-old mom of five. “There need to be systematic changes in health care access for black women and other women of color," she says, but in the meantime, "I saw a need that wasn't being met and figured I should do my part in meeting the need."

We now train upwards of 125 doulas per year. More than half are not moms. It has been that way for years now.

But the intense interest in doula work isn't exclusive to millennials who are moms. When she trained as a doula 15 years ago, Jada Shapiro, doula, birth and breastfeeding expert, and founder of Birth Day Presence and Boober, said she was one of just a few women who had not given birth out of the 20 women she trained with.

"At my center, Birth Day Presence, in New York City, we now train upwards of 125 doulas per year," says Shapiro. "More than half are not moms. It has been that way for years now."

While millennial doulas who are mothers cite their own birth experience as their motivation for jumping into this career, Shapiro has observed different motivations among women who are not mothers. Some are advocates of reproductive justice while others are considering birth work as a midwife or obstetrician and see doula training as a way to dip their toes into the water before making the leap into further education.

For labor doula work especially, not being a mom can make the job more doable. “This work has a demanding schedule and is often easier when there are no young children at home to tend to,” says Patterson.

That schedule, in fact, is one of the most challenging aspects of the job, and one young doulas struggle with most. As Pope puts it, "[In birth] there [are] long hours, unpredictable births, living a life of being on-call, missing out on family life.” She wasn't able to train and become certified as a labor and postpartum doula until her own children were approaching school age.

Even with a back up doula, birth being so unpredictable limits how many people we can take on… If I want to make a living wage, I'll need to broaden my services

Both Wade and Darling discovered that being a fulltime labor doula wasn’t compatible with their their lifestyle. For Wade, it simply wouldn't have been possible to maintain a full time schedule as a young mom of five children and graduate student, so she chose to offer her doula services to friends and family on a part-time basis. Darling has realized that her business model has to be reevaluated if she wishes to make a living as a full-time doula.

“It hasn't been sustainable, simply because I can only take on a certain amount each month," shared Darling. “Even with a back up doula, birth being so unpredictable limits how many people we can take on… If I want to make a living wage, I'll need to broaden my services. I'm working on certifying as a certified birthing instructor and placenta encapsulator.”

Darlings vision for diversifying her skill set is a strategy more doulas are taking on in hope of increasing their earning potential so they can sustain their career in birth work. Pope shares her secret to making sure she is making enough to maintain a healthy work-life balance and avoid burnout.

Pope has made it work by shifting her business to focus solely on helping clients after birth. "Doing postpartum work has really been key in making this work sustainable and I think that's where many new doulas go wrong," she says.

This generation accepts others. That’s fresh and new in the doula world.

On the financial front, she's found that breaking even is a lot about setting livable fees. “If a doula charges her worth or a living wage, enough to cover her time, gas for her car, childcare, and business expenses, this field of work can absolutely support a family,” she says, explaining that in Kansas City, where she practices, some student doulas might offer their services for free or charge as little as $300 while others charge as much as $1000. According to Shapiro, the New York City-based doulas trained by Birth Day Presence begin their pricing at $300 but might charge as much as $4300 based on the number of births they have under their belt.

Millennials do have something special that sets them apart from other generations of birth workers — their ability to look past their own personal convictions about how birth and postpartum should play out and provide unbiased support to new moms. Patterson explained that the millennials doulas she trains have become a part of a bigger movement to simply provide support for a mother, no matter what type of birth experience she desires, instead of pushing for a certain outcome (like unmedicated childbirth). “This generation accepts others,” says Patterson. “That’s fresh and new in the doula world."

"When I first became a doula, I wanted to change how woman gave birth," shared Darling. "Now I've learned that's not my role. I do feel [that] supporting clients will better the birthing industry and postpartum care for new parents and babies, but how people want to give birth is non of my business... I didn't expect my mindset to change so drastically."

CORRECTION: An earlier version of this article stated that Randy Patterson is the Director of Training and Development for Prodoula. She is the founder and CEO. That version also stated that Prodoula is a DONA-approved training company. Prodoula is a DONA competitor and also certifies doulas. We regret these errors.

More Like This
In Search Of New York City's Most Luxurious Birth Experience
I’m A Newly Single Mom. How Do I Get Over My Body Insecurity?
I'm Having A Slow Lazy Summer For the First Time In 20 Years & It’s All Thanks To My Son
Chrissy Teigen Gives a Cheeky Behind The Scenes Peek Into Her Pregnancy Glam Squad