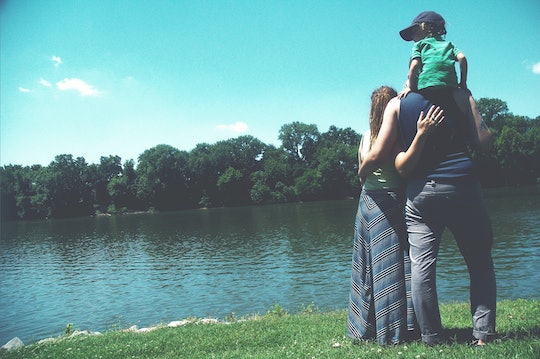 The Verdict Is In, Millennials Are Officially The Best Parents In History

Millennials have a reputation for being selfish, entitled, and caring more about buying avocado toast than saving for their futures. But it turns out that all of that is simply not true. At least for millennials who have kids. According to a new study, millennial parents are the best parents in history. Obviously, right?

Winnie, a tech company geared toward parents, recently surveyed 500 millennial parents about their feelings around parenting, their parenting styles and goals, their family life... basically everything. Expect to see a lot more studies like this in the near future as companies try to understand this new, fast-growing market. Another study done by Barkley, a consulting company, also surveyed hundreds of millennial parents and came up with the same sort of findings. It's conclusive: Millennial parents rule.

More than their parents or grandparents before them, millennials are more likely to see parenting as a part of their identity, will seek out the most information about raising healthy kids, and are more likely to fight to change how society treats parents and families. One of they takeaways from the Barkley study concluded:

Millennial idealism will shape a new global-citizen parenting mentality. Millennial parents will instill in their children an unprecedented sense of individual tolerance, inclusivity and social responsibility, and we’ll begin to see how this progressive world-view enters mainstream culture.

Here are some of the ways millennials make the best moms and dads.

They ~Choose~ To Become Parents

This is really important. Up until not that long ago, access to birth control meant that married people had kids whether they planned to or not. Culturally, as the studies found, women and men were both raised to assume that having kids was something one did, not something one chose.

Millennial parents are the first generation to start to change all of that. Family planning means that millennials are having kids a little older, when they're ready. According to the Winnie study, 99 percent of the respondents said they loved being a parent. That means happy, loving homes for kids.

They Focus On Experiences

Millennial parents aren't planning their lives around the classic milestones, like buying homes. Yes, the amount of student debt and millennials' insistence that buying a home isn't important rubs some economists the wrong way, but it's a good thing for parents.

According to the Winnie survey, only 46 percent of millennial parents value owning their home, while 56 percent valued shared family experiences. That means kids are doing cool things with their family and bonding. What a nice life, right?

They Know Their Sh*t

The internet has changed everything, including parents' access to information. Not only are millennial parents able to better access social networks and share information with friends, according to the study, 71 percent said that Google is where they go to find info about their kids' health and wellness.

This access means they're less likely to believe in old wives' tales to treat their children and are just generally more knowledgeable than their predecessors. Plus, they can order food or diapers anywhere they go. Tech really does make their life so much better.

They're Divvying Up The Work

This is a biggie — millennial parents are begging for cultural shifts that would benefit all families, like paid parental leave. Although most studies show that women still do the majority of the housework and parenting in homes with two parents, the Winnie study was a little more promising.

Brands and companies will eventually have to change their tune and speak to parents of both genders or offer parental benefits packages that appeal to millennial parents, which means the world is finally changing, slowly but surely.

They Make It All About Their Kids

This might be the most surprising, since millennials have a reputation for being the "Me Generation." But Winnie found that most respondents said that becoming a parent changed their attitude. "It became more about my child," or "I became less selfish" were common refrains among their survey sample. Over 90 percent of parents said that they value “raising successful children” over “living up to [their] full potential." That's self sacrifice, people.

All of these findings mean that Generation Alpha — or the kids of millennials — have more engaged, educated, and progressive parents than ever before.