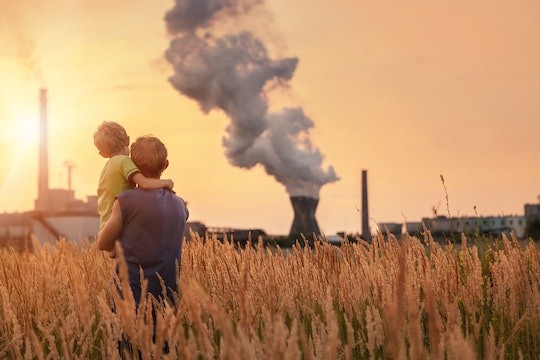 Millennials Think This Is The World's Biggest Problem Right Now

Unless you've been living under some kind of rock recently, you're aware of the two huge hurricanes either making landfall in the United States or brewing nearby. Last week, Hurricane Harvey devastated the state of Texas, and many cities are still recovering from the damage. And now, Hurricane Irma is heading straight towards Florida and the east coast, and families are preparing to take cover. These horrible storms are just one reason that a lot of millennials think climate change is the biggest problem in the world right now, even though hardly anything is being done to combat it.

According to the World Economic Forum's 2017 Global Shaper Survey, over 48 percent of 18 to 35-year-olds think that climate change is the most important issue in the world right now, with war and inequality trailing behind. Of course, all of these are big issues that need to be dealt with, but the historical hurricane season of 2017 seems to prove millennials right in thinking that climate change is the biggest threat. Truly, it is undeniable that climate change has intensified this year's hurricane season, and as more and more lives are being ruined by it, something needs to be done.

Not only do millennials think that climate change is a hugely important issue, but 90 percent of them also agree that "humans are responsible for climate change," according to a recent survey. So much for that whole "millennials aren't conscientious enough" rhetoric, huh?

According to EcoWatch.com, "about 78 percent of respondents also said they are willing to change their lifestyle to protect the environment," which also shows that this generation truly wants to protect the Earth — no matter the costs.

And truly, millennials are onto something. Climate change is a very real and present threat, as made clear by this year's hurricane season. Speaking to Bloomberg, climate scientist Anders Levermann said, "Burning coal, oil and gas warms our planet and that way supplies energy for the build-up of ever more powerful tropical storms." He went on:

Unfortunately, the physicality is very clear: Hurricanes get their destructive energy from the warmth of the ocean, and the region’s water temperatures are super elevated.

At this point, denying that climate change is a real and present danger is in itself a real and present danger. While millennials might not be perfect, they at least know that science is real, and that paying attention to what's happening in the world is crucial. As scientists suggest, climate change has made these hurricanes the life-changing, catastrophic storms that they are.

So why are millennials seemingly the only ones who are willing to understand that?