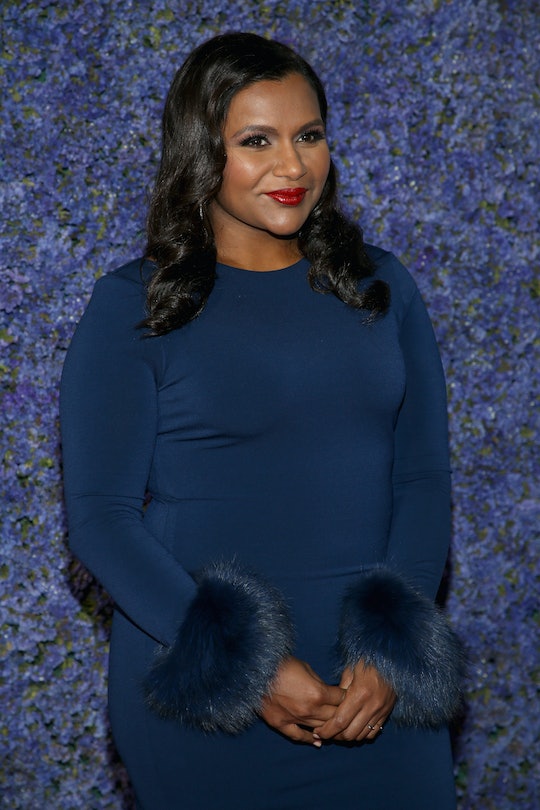 It's hard to believe that Mindy Kaling has already been a mom for an entire year. Over the weekend, Mindy Kaling celebrated her daughter Katherine's first birthday. And not only did Kaling get her daughter a magical cake, but the family of two was lucky enough to spend the day across the pond.

On Sunday, Mindy Kaling shared a few photos and videos to her Instagram Story from a book signing in London, for her 2011 book Is Everyone Hanging Out Without Me? (And Other Concerns). A few hours later, she posted two photos of her daughter's first birthday cake, letting the world know that Kit was a whole year old. The outside of the gorgeous cake was turquoise, featuring a rainbow design and the message "Happy 1st Birthday Kit!"

Kaling captioned the photo, "Only the best first birthday cake," and she noted that the cake was created by London's The Hummingbird Bakery. That means that Kit got to celebrate her first birthday across the pond in freaking London! If that's not cool, I don't know what is.

And the cake's awesomeness didn't stop there — Kaling then shared a photo of the cake sliced open, revealing a rainbow six-layer center. Kaling wrote "OMG" and "Happy Birthday Katherine ❤️" on the photo. OMG is right! That is one magical cake.

Kaling welcomed her daughter, Katherine Swati Kaling, at 10:50 a.m. on Friday, Dec. 15 in Los Angeles, People reported at the time. Kaling has shared plenty of adorable Katherine updates with fans via social media over the first year of her life, but a few things have remained private. Most notably, Kaling has deliberately kept the identity of Kit's biological father undisclosed, and she's also made a point to hide Kit's face from every photo she posts of her.

Fans have spent countless hours theorizing about these things, and it makes sense why they'd want to know more details about baby Kit. For example, when Kaling attended the Oscars with her ex-boyfriend and bestie B.J. Novak earlier this year, fans went wild, as noted by Redbook. However, leaving those things to the imagination is totally Kaling's right, and it's clear that she is a super dedicated mother to her daughter — and that's the most important thing.

Plus, Kaling has shared plenty of mommy tricks with fans over the past year. Over the summer, she posted several baby food recipe tutorial videos on Instagram. Recipes included mashed banana date peanut butter; chicken, onion, garlic and peaches; and sweet potatoes, green beans, mangoes, and salmon. She told followers that meal prepping for Kit is one of the most rewarding parts of her weekend, as the Daily Mail reported. "Because I work, I like making them on the weekends, because it makes me feel like I'm part of my daughter's life," she said in one of her Instagram videos.

Fans oohed and aahed when Kaling shared a photo of herself and Kit on Halloween, in costume. Kaling went as a bottle of mustard, and her daughter went as a lion.

It's clear that Mindy Kaling absolutely loves being a mother. Hopefully she will share more first birthday details — aka a detailed description of how that cake tasted — sometime soon!