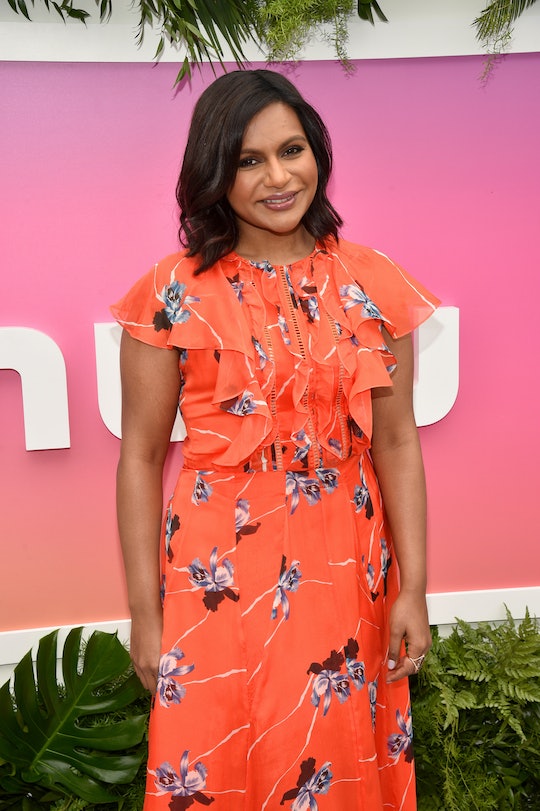 Looks like Mindy Kaling is really loving her new Sunday ritual. The actress and mama-of-one has gotten super into making baby food for her daughter, Katherine, who she gave birth to in December. Recently, she's taken to Instagramming goofy video tutorials of her MasterChef-level recipes. And this weekend, Mindy Kaling shared her latest baby food tutorial — with a Mission: Impossible twist.

"Hi guys, it's Sunday, which means that I'm making baby food for my daughter," Kaling told the camera in her Instagram story. "And I think because I just saw Mission: Impossible, I'm going to do something with protein."

"The mission, should I choose to accept it... chicken, onion, garlic and peaches," Kaling captioned the next slide, which featured a few boomerangs of herself brandishing the ingredients. (Wait, is this sponcon for Mission: Impossible - Fallout?)

"I'm chopping up some garlic with this because I think that it'd be good for my daughter to have some food with flavor, so she can start eating regular food soon," Kaling said in the next story. She captioned the story, which showed a video of her chopping onions (and squeezing garlic cloves?): "Introducing babies to flavor early so that transitioning to normal food is easier!"

While the food simmered, Kaling continued to wax poetic about her new favorite film. "This has nothing to do with baby food, but I would argue that Henry Cavill was better in Mission: Impossible 6 than he was in Superman, even though he is Superman," she said.

Anyway, Kaling returned to baby food in the next slide, where she explained that after everything completely cooked through, she added it all to the blender along with some chicken broth. (Yes, the Mission: Impossible soundtrack was playing during that part, too).

"And now, the moment of truth: where I eat the baby food," Kaling said before having a taste. "Mmm, very good," she concluded, adding, "I feel like I always have to try my kid's food before I give it to her, because it's only fair."

She then poured her mixture into a Kushies Silitray and labeled it. According to Bed Bath & Beyond's website, the Kushies Silitray is designed for freezing homemade food or breast milk in appropriate portions.

Then, Kaling concluded her tutorial series with a sign off and one last plug for — you guessed it — Mission: Impossible - Fallout. "I hope you enjoyed making baby food with me, and you go see Mission: Impossible 6, starring my good friends Tom Cruise, Rebecca Ferguson, Simon Pegg, but mostly Henry Cavill," Kaling said. If anyone reading this is friends with Henry Cavill and can set him up with Mindy Kaling, I'm sure she'd really appreciate it.

This is not the first time Kaling has shared a baby food recipe tutorial with fans. Last Sunday, the actress showed followers how she makes banana date peanut butter for Katherine. And a few weeks ago, she shared several other foods she makes for her daughter, including sweet potatoes, green beans, mangoes, and poached salmon, according to the Daily Mail.