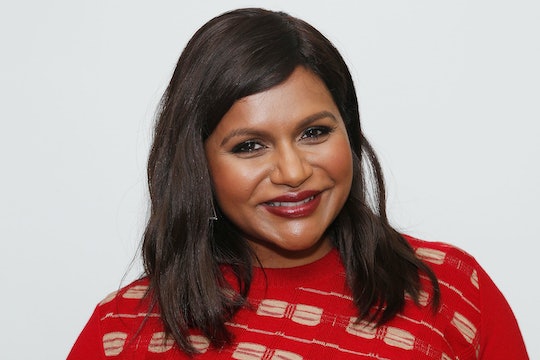 While she doesn't share too much about her little girl, Mindy Kaling gave us a peek at her daughter's backyard playsets in two new Instagram posts. Not only does the The Mindy Project star have really beautiful backyard with what looks like the softest grass you've ever seen, but she's got swings, slides, and more for her toddler to play on.

Like millions of other families right now, Kaling and her 2-year-old daughter Katherine, who she's rather adorably nicknamed "Kit," are spending a lot more time at home these days. And it sounds like she's embracing the opportunity to have more time with her daughter. She recently told USA Today in an interview that she's enjoying "this experience of being a stay-at-home mom" while they're quarantined.

"I did my maternity leave, but my baby was so small that it wasn't like she had a personality. It’s like, I get to redo my maternity leave, but she's 2 and she talks and I can hang out with her," she told USA Today. "And I'm not, like, recovering from delivering a baby and I don't have to breastfeed. I've been thinking of it as the maternity leave that I wanted. So I'm doing a lot of cooking and being domestic, which is something I don't really get to do."

Something else she's trying? Hide-and-seek with little Kit. The Office star shared a photo of herself hiding behind her curtains, offering a peek at her daughter's playset in the backyard. "I’ve been here for 40 mins, do you think my daughter is still looking?" she captioned the post.

To be fair to little Kit, with a backyard playset like that and the one seen below, she might not be satisfied with a regular old game of hide-and-seek. I mean, not even Mindy Kaling can stop herself from taking her daughter's swing for a little spin, Easter bunny ears and all.

Kaling has loved her daughter's playset ever since she bought it for her last May in an effort to apparently be the "cool" parent, as she wrote in an Instagram post at the time.

"All I’ve ever wanted for my kid is to have 'the fun house," she captioned a May 2019 Instagram post. "Remember that one friend that had the coolest backyard and everyone wanted to hang out there all the time? Well, now I’m the cool parent with the cool backyard."

Apparently her playset, which she purchased from Cedar Works Play, has done more than make her the cool parent with the cool backyard. It's also given her the chance to have a little fun herself. Especially when her daughter leaves her hanging for 40 minutes during hide-and-seek.