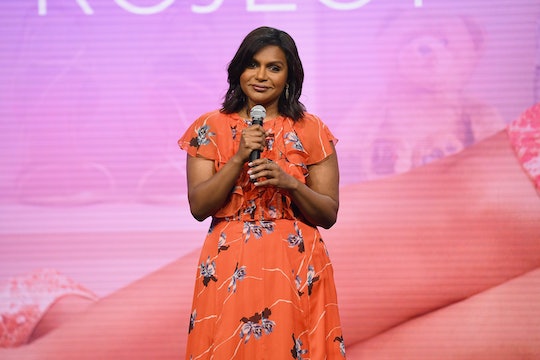 Mindy Kaling Is Reportedly Having A Daughter, Which Is Just Perfect

It's hard to trust even the best of friends with top secret news, which is something Mindy Kaling might be thinking about this weekend. At the Paley Fest Fall TV Preview event for The Mindy Project in L.A her co-stars revealed that Mindy Kaling is reportedly having a daughter, though the actress and writer hasn't confirmed the news personally just yet. So don't go picking out or betting on names just yet.

Beth Grant, who plays Beverly Janoszewski on The Mindy Project was very excited about the news. She told Us Weekly:

Everyone else in the cast is ready for a mini Mindy, too. Ed Weeks, who plays Dr. Jeremy Reed also spilled the beans on the red carpet. He reminded fans that the show was actually a tribute to Kaling's mother, who passed away before The Mindy Project was even picked up or became such a hit. "And it ends with her having a daughter of her own," he added.

Want us to pass the tissues? Weeks said that they all needed a few when she broke the news to the cast. “It’s a lot a lot. When she reminded us all of that, we all cried in the final table read. I mean Jesus, life! It makes some very interesting and beautiful patterns sometimes," he said.

Of course, Kaling would be a great parent to any baby, but she's been such a role model to young women since taking over the small screen that the idea of her being a mother to little girl is, as Weeks put it, "a lot a lot."

The 38-year-old Kaling broke the news of her pregnancy earlier this summer, and hasn't yet revealed who the father is (not like it's anyone's business), and has kept pretty quiet about the whole thing. But in past interviews, she was very open about toying with the idea of motherhood. She wrote in her most recent essay collection calledWhy Not Me? that she worried about getting too old before having children.

She wrote that she would wonder late at night, “What if my kids are really young when I die because I waited too long to have them?" Looks like she can cross one 4 a.m. worry off of her list. But she should probably tell her friends to keep their lips zipped at the next big event if she wants to keep some privacy until the baby arrives, right? They mean well, of course.