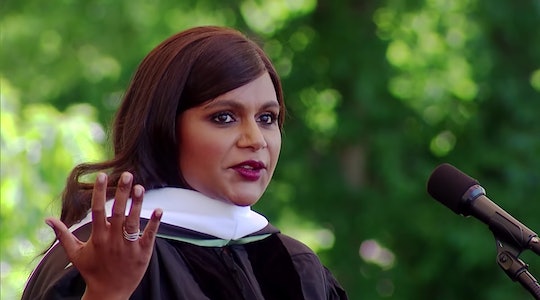 Everyone has a different experience when bringing their baby home for the first time. And for Mindy Kaling, that experience was nothing like she imagined it would be — but she quickly learned to embrace it. Mindy Kaling opened up about being a single mom in a speech at Dartmouth College over the weekend, reported ET Online — and parents from all different kinds of families will definitely take comfort in her words.

Kaling, a 2001 graduate of Dartmouth, was the commencement speaker at her old stomping grounds on Sunday. In her address, she reflected on a checklist she wrote upon graduation of everything she wanted to accomplish as an adult, as seen in a video of her speech. List items included getting married by 27, having kids at 30, winning an Oscar, starring in her own TV show, and hosting the MTV Movie Awards ("This was 2001 guys, it made more sense then").

If you're a big Mindy fan, you know the one thing on that list that she accomplished was starring in her own TV show — a pretty damn sweet accomplishment. She also had a kid — though that happened about eight years after she had originally predicted. She welcomed her first daughter, Katherine, as a single mother, on Dec. 15, 2017.

Kaling then shared an anecdote about welcoming her daughter, and how she eventually realized it was OK that the experience was nothing like she'd pictured it would be. She told the crowd:

After my daughter was born in December, I remember bringing her home, and being in my house with her for the first time and thinking, "Huh, according to movies and TV, this is traditionally the time when my mother and spouse are supposed to be here, sharing this experience with me." And I looked around and I had neither, and for a moment it was kind of scary, like, "Can I do this by myself?" But then that feeling went away because the reality is, I’m not doing it by myself. I’m surrounded by family and friends who love and support me.

In addition to having the support of family and friends, her love for Katherine also keeps her motivated as a mom. She added:

Basically, if your life isn't unfolding the way you hoped it would back when you were 22, that's OK!

Kaling has been opening up about her experiences with Katherine more and more as of late. Last week, on The Today Show, Kaling told host Hoda Kotb one of her favorite things about her daughter. "She's such an easy laugh," Kaling said on The Today Show. "I just sing 'ABCDEFG' and I just sing that and she dies."

She also opened up about a special bond she and Katherine already share — an intrinsic respect for the goddess that is Oprah. When Kaling took Katherine over to her A Wrinkle in Time costar's house, she said the newborn was magically well-behaved, People reported. In an appearance on The Ellen DeGeneres Show, Kaling said:

The minute we went in, I was like, "Katherine, please, please. You have no idea how high the stakes are right now." And we walked into the door, and her eyes went wide and she stopped crying, like she knew she was in Oprah's house. And then she was just coyly smiling and being adorable for the next four hours.

It's clear that Mindy Kaling is loving motherhood so far, and hopefully she shares more heartwarming-yet-hilarious anecdotes soon.