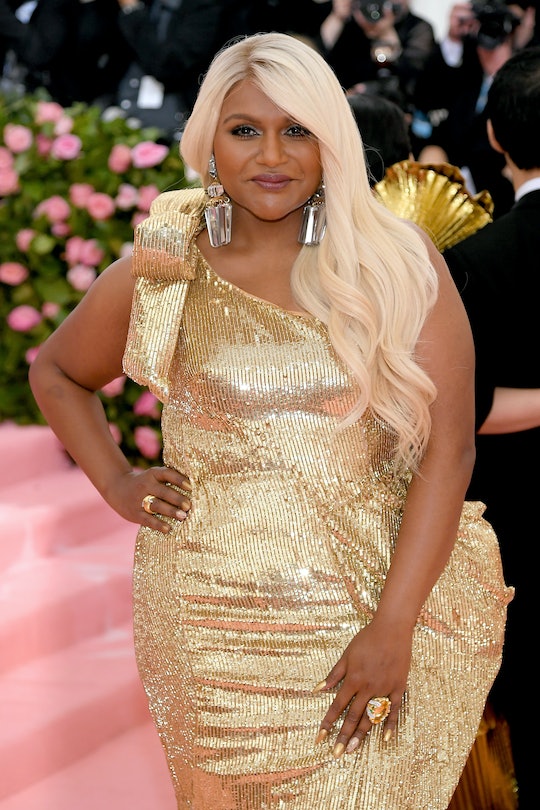 Do blondes have more fun? That's a question for Mindy Kaling, who went full platinum blonde for what some call fashion's biggest night. The hair choice was definitely a wild one, but Mindy Kaling's blonde hair at the 2019 Met Gala was one fans were extremely supportive of on social media. Since Kaling's natural hair appears to be a dark brown, the shocking blonde draping her shoulders sent waves throughout the Met Gala red carpet. Even more exciting is that somehow Kaling managed to keep her blonde 'do a surprise until she actually arrived on the carpet. That's not an easy feat for someone of Kaling's caliber!

As expected, fans could not wait to share their thoughts on Twitter once the first photos of Kaling as a blonde started to turn up online. "MINDY COME THRU WITH THE BLONDE," wrote one user, who added, "WE STAN A GORGEOUS GODDESS."

Goddess was definitely the right choice to describe Kaling, who looked like she belonged on Mount Olympus with the rest of the Greek Gods.

Just hours before arriving at the Met Gala, Kaling teased her look for the night on her Instagram story. First she showed off her pointy gold nails, whom she credited to Luxuria Nail Bar. In the next clip on her story, Kaling revealed she would be wearing Moschino on the red carpet by pulling a gold belt with the designer's name attached into the camera's view. Clever!

However, it wasn't until after she made the blonde reveal on the steps of The Met that Kaling shared images of her hair for the evening. Kaling shared two images of herself from the waist up on Instagram, and in the caption she credited hair stylist (and self proclaimed "Extension Emperor"), Marc Mena, for the look. And a look it sure was!

As for Kaling's Moschino dress for the evening, it was floor length and sleeveless. The metallic gold gown also featured a perfectly placed bow on Kaling's right shoulder, which draped down onto her chest.

Speaking of draping, Kaling also draped herself in some massive jewels for the evening. Photos barely seem to do the accessories justice, but Kaling's earrings, which were by David Webb according to her Instagram credits, hung low alongside her platinum blonde hair. A giant citrine or topaz looking diamond was placed on her left ring finger, too, was one of the finishing touches.

The night before the Met Gala, Kaling took to Twitter to have a little fun at the expense of her role in a little movie called Ocean's 8. For those of you who aren't familiar with the film, Kaling plays a jeweler, Amita, who helps Anne Hathaway's Debbie Ocean rob a necklace from — you guessed it! — the Met Gala.

"Throwback to all of my #MetGala lewks. Every single one," Kaling wrote, captioning a collage of her previous Met Gala ensembles. Included in the collage is an image of Kaling from Ocean's 8, in which she's wearing a gold gown while walking down the infamous steps.

Looking back at Kaling's tweet, was she poking fun at her role in the movie or just teasing her 2019 Met Gala look? Hmm.