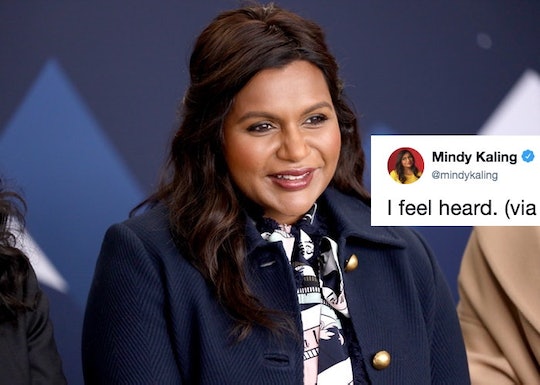 Sleep. I remember when I was the mother of babies and I fantasized about sleep in a way that was unhealthy. When I was watching television and a commercial came on where a woman was napping, I cried hot bitter tears because it was 3 a.m. and I was trying to nurse my happy, giggling baby. This is a universal truth about parenthood, and even celebrities feel the pain. In a recent social media post, Late Night's Mindy Kaling shared her thoughts on "mom sleep" detailed in a letter board and she obviously knows exactly what kids do to your precious zzz's.

Kaling is the proud mom of 15-month-old daughter Katherine Swati and she is proudly raising her daughter on her own. While Kaling seems to be having a pretty grand time of it, she admitted during her Dartmouth commencement speech that it can be a bit of a struggle being the only adult in the house.

"After my daughter was born in December, I remember bringing her home and being in my house with her for the first time and thinking, 'Huh. According to movies and TV, this is traditionally the time when my mother and spouse are supposed to be here, sharing this experience with me,'' she said, according to TIME. "And I looked around, and I had neither. And for a moment, it was kind of scary. Like, 'Can I do this by myself?'"

Because she's on her own with little Katherine, Kaling is presumably the only one who has to deal with any sleeping issues the little girl might have. And it looks like she might be having several, considering the post Kaling recently shared from Canadian mom blogger Danielle Rae.

The letter board Kaling shared on social media reads, "Mom Sleep: It's like regular sleep but without the sleep." Kaling then posted on Twitter: "I feel heard."

Considering a recent study shared by The Independent that found new parents only get an average of about four hours sleep per night, it's no surprise that other parents piled on in agreement — they're not sleeping either.

Most were too tired to write tweets themselves and so just used a GIF to share their exhaustion.

Back in February 2018, Kaling admitted her little girl was not a big fan of sleeping right out of the gate. According to PureWow, the new mom was at the premiere for A Wrinkle In Time and admitted, "The best thing my baby has been doing lately is sleeping. She doesn’t love doing that, she loves not sleeping, but when she does, it’s very fun.”

No wonder the few pictures she has shared of her daughter have been of the two of them in matching pajamas. I think it's wishful thinking.

I wish I could be a wizened old mom who tells Mindy Kaling that someday she will look back on these sleepless years with fondness. This is probably not true because sleeping is awesome. But someday she will sleep again, and I'm telling you every time you startle awake and realize you can just go back to sleep is like falling in love all over again.

More Like This
Marie Kondo Gives Up Tidying Post-Kids, Sparking Joy For Moms Everywhere
10 Of Julia Louis-Dreyfus' Best Quotes On Motherhood & Raising Her Sons
Sally Field Is The Ultimate Cool Mom Who Once Tried To Set Her Son Up With An Olympian
Lisa Marie Presley’s Daughter Posted A Beautiful Throwback Photo With Her Late Mom
What Parents Are Talking About — Delivered Straight To Your Inbox