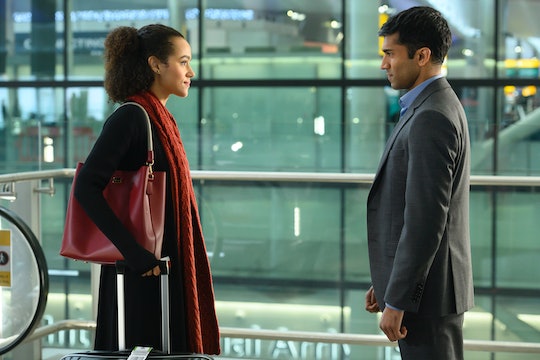 We live in a TV-watching culture where our attention spans can range from being able to sit through an entire season of Orange Is the New Black without getting up once to needing shorter and shorter television seasons. Enter the increasing popular limited series, which is what Mindy Kaling's upcoming Four Weddings and a Funeral is on Hulu. And the Four Weddings and a Funeral trailer will show you that it is a reboot of the 1994 movie that fits perfectly in a limited series format.

Kaling, who is probably known best as Kelly from The Office and the mastermind behind The Mindy Project, wrote the limited series remake and Richard Curtis, who wrote the original romantic comedy, will serve as an executive producer. So just in case you happen to be a big fan of the original movie that may or may not have premiered before you were born, it will likely stay true to the original film in spirit.

The Hulu limited series follows a group of 20-something friends as they go through the ups and down in life and wade through four weddings and, yes, a funeral, at some point. Judging by the trailer, there is a lot of ground to cover. The limited series follows longtime college besties Maya, Craig, Ainsley, and Duffy a they reunite in England for a wedding. But when a scandal is exposed, their lives are thrown into disarray and tons of comedy, drama, and romance ensue. Even if you never watched the original '90s movie, you can still totally appreciate Kaling's Hulu show, if only because you get to see Missendei from Game of Thrones (Nathalie Emmanuel) in modern clothes and with an American accent.

Four Weddings and a Funeral premieres on Hulu on July 31 and will span 10 episodes. There's always the off chance that Hulu could pick up the limited series for a future second season if the show is well received by audiences, but right now, fans can expect the 10 episodes to round out these characters' storylines in a fresh new way.

In June, Kaling spoke to Parade about being approached by MGM, which maintains the rights to the original film. She said that the only way she would feel comfortable working on the reboot in series form was if the original writer of the film would be a part of it. Aside from that, it was also important to Kaling that she bring the story back to life with more of a modern spin.

"I love the world of Four Weddings so much that I thought, 'If I were to do it, but through my lens of what I think would be a great modern-day couple, what would that look like'?" She said. "So, that’s what it is. It’s a show that I want to watch. The romantic leads are an African-American woman (Nathalie Emmanuel) and a British-Pakistani man (Brandon Mychal Smith). The cast is incredibly diverse — half Americans and half Brits — and set in London."

The trailer for Four Weddings and a Funeral already gives viewers a taste of what the limited series will probably be like. Maya meets her best friend's new beau in the airport on her way to see said best friend and catches feelings for the handsome stranger. Flash forward to Maya meeting him in London as her friend's boyfriend and you can already see the wheels of drama and heartache turning.

Although some of the characters might be different this time around and the show has 10 hour-long episodes to tell these stories rather than less than two hours total, it looks like Hulu's Four Weddings and a Funeral will remain faithful to the original in terms of its tangled web of romance, drama, scandal, and comedy.