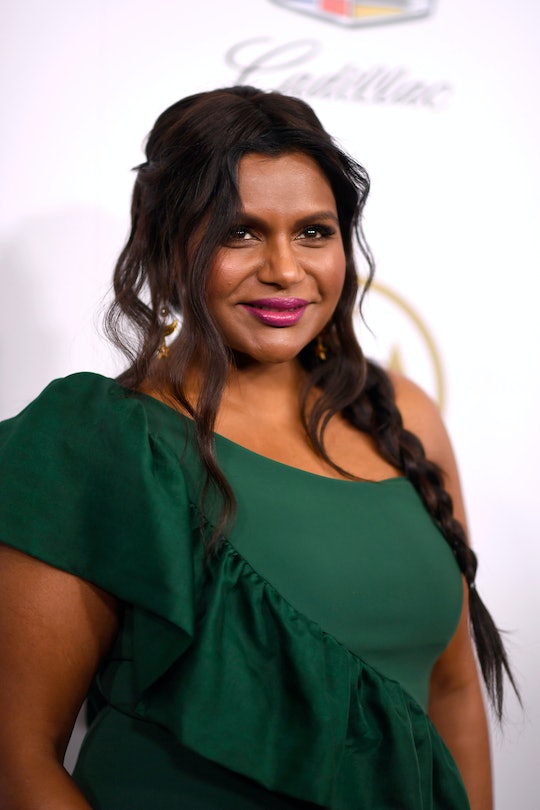 Mindy Kaling most definitely seems like she has it all. Her career, which has always been pretty fantastic to her fans, is now getting attention all over the place. She's also mom to one little girl, Katherine Kaling, who she has managed to keep completely out of the public eye and now can we talk about just what a difficult job that would be? Kaling pulls it off though, and she makes it look easy. She sort of makes everything look easy, in fact, but perception is not always the same as reality. In fact, Kaling's quote about working soon after giving birth offers a little insight into how genuinely complicated all of that work/life balance stuff can truly be.

The Mindy Project creator welcomed 1-year-old daughter Katherine in December 2017, according to Us Weekly, and life has apparently been rather gloriously chaotic for her ever since. According to The Hollywood Reporter, she starred in Oceans 8, began production on a new version of Four Weddings And A Funeral, wrote and starred in Late Night with Emma Thompson, and moved to the United Kingdom for work. All while raising her daughter on her own (Kaling has never shared the identity of Katherine's father).

It's been a busy time for the new mom, perhaps especially because she was trying to breastfeed her infant daughter while working... something many of us know a little thing or two about.

During a recent interview with Variety, Kaling opened up about her career, her reputation as a super-relatable nice girl (which she insists she is not but then goes on to be a super nice person throughout the interview so you decide) and, of course, her life as a mom. Or rather, trying to find balance between being a mom and developing her career.

As she noted in the interview, she started shooting scenes for Late Night when her baby was only 12 weeks old, and she wants other moms to know it was tough going.

"Don’t do it. You don’t want to have to breastfeed between scenes," she told Variety.

This isn't the first time Kaling has opened up in her own way about trying to honor her work and her daughter in ways that make sense for her. Last February, when her daughter was 2 months old, Kaling shared a picture of her breast pump from behind-the-scenes at a press junket for A Wrinkle In Time on her Instagram Story with the caption, according to Health: "The loneliest breast pump. That all day press junket new mom life."

She also took to tweeting random thoughts early in the morning, because this is life when you have to be up breastfeeding a baby.

Mindy Kaling clearly loves her work and she loves her daughter and she loves being in a position where it's OK to actually love both of these roles in her life. Because you don't have to stop loving the other parts of who you are when you become a mom. Breastfeeding can be tough, of course, but hopefully you're in a position to make it work.

And hopefully you love your work as much as Mindy Kaling does, because that seems to be the secret.