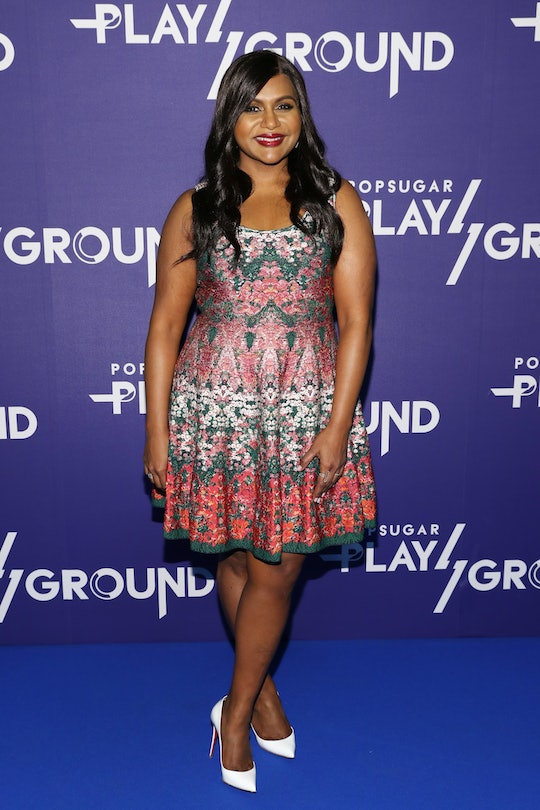 Let's face it: Mindy Kaling is basically superwoman. In addition to being a successful actress, writer, and producer, she's also the hilarious, smart, and talented celeb BFF we all dream of having (and she's friends with Oprah, NBD). But in December 2017, Kaling added yet another accomplishment to the list: she became a mom. Her daughter, Katherine Swati, is now 6-months-old, and on Sunday, according to Entertainment Tonight, Kaling spoke about becoming a single mom while giving the commencement speech to graduates at Dartmouth College, her alma mater. And like many of Mindy Kaling's quotes about Katherine since her birth, it sounds like motherhood has become her most important achievement, despite the natural ups and downs.

In her speech, the Champions star encouraged the new grads not to be too attached to their post-college life to-do lists, and to consider that not only is it not necessary to do things in a certain order, it's also totally fine to not to some things at all. And though it sounds like there were many things in her life that taught her that lesson, Kaling admitted that it was becoming a single mom for the first time at 38 that really drove that message home.

For the most part, Kaling kept news of her pregnancy pretty quiet — and in fact, it was, Oprah, her A Wrinkle In Time co-star, who actually spilled the beans and made the news public in July. Luckily, Kaling didn't particularly appear to mind, and in her Dartmouth speech — as well as in previous interviews — Kaling shared a number of details about her mom life that parents everywhere will totally understand.

There Isn't Just One "Right Way" To Become A Mom

In her commencement speech, Kaling spoke about all the goals she set for her post-graduation self, like getting married and having kids by the time she turned 30, and winning an Oscar. Neither of those things happened, though, and while there's no question that Kaling's actual accomplishments have turned out to be majorly impressive, she said bringing her daughter home, by herself, eight years after she'd expected to, was proof that checking off arbitrary life goals from a list you made at 21-years-old is totally unnecessary. She said,

After my daughter was born in December, I remember bringing her home and being in my house with her for the first time and thinking, 'Huh. According to movies and TV, this is traditionally the time when my mother and spouse are supposed to be here, sharing this experience with me.' And I looked around, and I had neither. And for a moment, it was kind of scary. Like, 'Can I do this by myself?'

Kaling explained that, while it may not have been what she expected, the reality was that she was still "surrounded by family and friends who love and support [her]." But that, more importantly, the love she has for her daughter actually "eclipses anything from any crazy checklist."

Given how much joy Kaling seems to be deriving from being a mom to her daughter — and given that having kids by 30 was on her life checklist — it seems reasonable to assume that she was always one of those people who just adored being around children. Except, well, not so much. In an interview with Ellen DeGeneres earlier this month, Kaling admitted that, actually, she had "never been a kid person." She joked,

I was always the person who, when I saw like, a 1-year-old baby, and [someone would say] 'Mindy, come meet my baby,' I'd be like 'Hello, young man,' like, shaking hands with an infant.

These days though, Kaling said that Katherine is a "great baby" and that so far, life with her daughter has "been pretty easy." In other words? While it probably doesn't hurt to be naturally good with kids in your pre-parent years, Kaling is proof that it's definitely not a requirement.

No matter how much you love your child, being a parent obviously also comes with its fair share of challenges. And in the first few months, that usually involves putting up with lots and lots of tears. In an interview with Hoda Kotb in April, according to E! News, Kaling said that she got "zero feedback" from her daughter "except for crying for the longest time," which, as any parent knows, is tough to deal with — especially if you're sleep-deprived. But Kaling also admitted that, even though she knew it probably wasn't personal, she couldn't help but wonder if she was doing something wrong. She explained, "Then you start wondering, 'Does she care about me? Know about me besides that I'm a food source for her?"

It sounds like things have become a bit easier now that Katherine is a little bit older, but even with a 6-month-old, Kaling said she definitely has plenty of stressful moments — like when she tried to bring her daughter to an event at Oprah's house. In her interview with DeGeneres, Kaling explained that her A Wrinkle In Time co-star had organized a screening for the cast at her home, but when the day came, Katherine had actually been "really fussy," including during the car ride over. Like pretty much any parent would be at this point, Kaling admitted she was feeling pretty desperate, so she ended up begging her tiny baby to somehow get her act together. And miraculously, the pep talk actually worked. She said,

The minute we went in, I was like, 'Katherine, please. You have no idea how high the stakes are right now.' And we walked in the door and her eyes went wide, and she stopped crying. Like, she knew she was in Oprah's house. And then she was just coyly smiling and being adorable for the next four hours.

And You Probably Never Stop Worrying About Everything

As pretty much any parent can tell you, being responsible for a human life is a huge, daunting responsibility that makes you worry a lot. And Kaling is no exception: in an interview with TODAY in March, Kaling said she "never understood how much [she] would worry" as a mom, and that, while she's enjoying having a daughter, she's "anxious constantly." And for now, that's also been the driving force behind her decision to keep photos of Katherine off of social media. She said,

I’m keeping her under wraps for now. I would kill someone who said anything about her. I’m such a worrier — I can’t do that. I’m far too fragile. She’ll be big enough and people will see her. Am I even doing the right thing? Maybe she’ll be mad at me later on but I’ll deal with it then.

When you're a mom in the public eye, the pressure to protect your children's privacy must be immense. And yet, Kaling's general anxiety over wanting to do things "right" is also totally common. We all want keep our kids safe and want to raise them to be happy and healthy and well-adjusted, after all, and well, it can be really hard not to be worried about whether you're doing a good enough job.

But Falling In Love With Your Child Is So Incredible

While Kaling could easily have been one of those celebrity parents that makes having kids look so easy and fun all the time, it's actually really validating to hear her speak so honestly about the fact that, sometimes, it's also really hard. Yet, what's also really clear in Kaling's comments about motherhood is that, through it all, she's still completely in love with being Katherine's mom.

For one, Kaling told Kotb that one of the sweetest things about her young daughter is that "she's incredibly easy to make laugh," and said "I just sing The Sound of Music to her. It's the best." And in May, Kaling told People that those sweet moments have more than made up for all the difficult ones. She said,

Her whole thing now is constant smiles. I’m waking up every three hours to feed her and it’s a lot. But just when I’m like, ‘Oh my gosh, this is overwhelming,’ she throws me a huge smile. It’s the best part of my day.

Honestly, as cool as Kaling seems like she'd be to hang out with, the reality is that her life as a celeb mom probably doesn't look a whole lot like the average mom's, and given that she's already had the opportunity to hang out with Oprah, Katherine's upbringing will probably be pretty different than most kids' too. But the way she speaks about motherhood shows that there is still so much that is universally experienced no matter who you are. And the fact that she's willing to be honest about it is one of the many reasons why she's so great.

More Like This
Mindy Kaling’s Daughter Is A Total “Narc” With Her Little Brother
10 Of Drew Barrymore’s Best Quotes On Motherhood
When Christina Aguilera’s Kids Give Her A Bouncy House On Mother’s Day, She Jumps Right In
Ashley Graham On The “Fun, Organized Chaos” Of Raising Twins