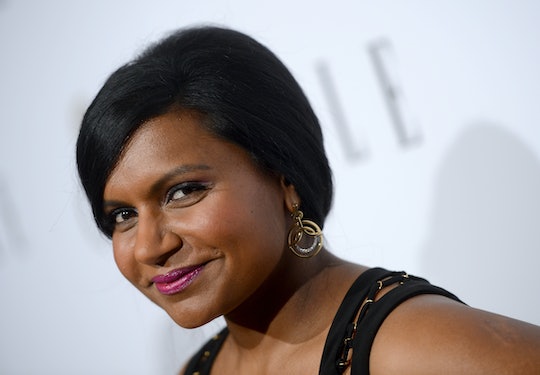 Mindy Kaling is perhaps one of my favorite celebrity moms and that's saying something because I know a whole lot about famous mamas. I might love her so much because she always manages to share satisfying anecdotes about her daughter Katherine while simultaneously protecting the 2-year-old little girl's privacy. Or maybe it's because she makes me laugh, like she did during a recent interview on NBC's A Little Late With Lilly Singh. During the chat, Mindy Kaling explained why she hides her daughter's face on social media, and her reasoning was simply hilarious.

The Office star was the first guest on the Monday premiere of Singh's new show, which is pretty cool since they were co-stars on Late Night. Not to mention, Singh, casually made history as the very first woman of color to host a late night talk show on a major network.

Impressive accomplishments aside, my ears perked up when the women got to talking about Kaling's daughter, Katherine Swati Kaling (Kit for short). As Kaling chatted, she began sharing photos of the little girl, and after a few photos, it became pretty clear that none of them showed Kit's face. Especially with Singh pointing it out constantly by saying sardonically, "Look at Kit's face... those dimples! And her eyes, are those hazel?" At which point Kaling explained, "She's in the witness protection program. She witnessed a crime and she can't show her face."

Ha! Did Kit witness Kaling slaying someone with her humor? Because that's the only crime that comes to mind.

But in all seriousness, Kaling has explained exactly why she doesn't want her daughter's face to appear in photos. In June, The Mindy Project star sat down for an interview with Glamour, and explained:

I’m on social media and like sharing with people what my interests are and how my day’s going and all of that, but I do feel entitled to have privacy about my daughter and my relationships. It’s really essential to my life that there be something not everybody knows about. That’s a boundary, but it’s a very small boundary. Everything else I really don’t have any issue sharing.

During the interview, Kaling also told Singh about how being a parent has changed her life in unexpected ways and makes her reflect more deeply on her decisions. For instance, Kaling said she was asked to support a shark conservation group by swimming with sharks in the Caribbean last year and almost did it until she thought about Kit.

This is parenting, folks. A bunch of micro-decisions that turn into a sort of ethos you didn't know you had before you had kids. Swimming with sharks? No. Sharing photos of your kid's face with millions of social media followers? No.

Wearing matching pajamas? Yes. Every day of the week.