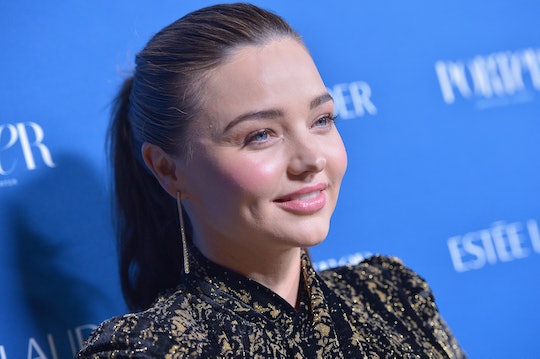 Miranda Kerr Welcomes Baby No. 3 & Adds Another Boy To Her Sweet Brood

Sometimes I feel like celebrity parents should come to me for advice. Not because I know anything, but just because I had four kids and I feel like this gives all of my words a sort of heady gravitas. And I have never felt any new mom might benefit from my pearls of wisdom as a mom of four boys more than Miranda Kerr. It's not that the Victoria's Secret model is a bad parent or anything, she's just catching up to me in numbers and I feel like we should chat. That's right, Miranda Kerr gave birth to baby number three and it's another little boy. So if she wants to hit me up with a text and go for tea, I can really help her prepare.

Kerr and her husband, Snapchat CEO Evan Spiegel, just welcomed a baby boy together on Tuesday, as her rep told People in a statement. The little boy is named Myles, and the couple are "overjoyed" to add another sweet baby to their growing family, stating, "We are overjoyed at the arrival of Myles and so appreciate everyone’s kind words and wishes during this special time. We couldn’t be more excited to welcome our beautiful son into our family.” K

The 36-year-old Australian mother of three presumably already knows everything she needs to about raising boys (the smells, the frequently violent hugs that are full of love, the energy levels), and obviously doesn't need any help from me. In fact, it seems she had a bit of a tough pregnancy the third time around and is probably just pretty happy to get little Myles out into the world. She opened up to Us Weekly back in June about her struggles with morning sickness, something she's had to come to terms with each time:

I suffered quite a lot of morning sickness and I was on bedrest for a little while, then I pinched a nerve in my neck. Every woman is different. For some reason … with each three of my pregnancies, I’ve been super nauseous and a little more sensitive.

When it comes to raising three boys, Miranda Kerr isn't exactly alone either. She has ex-husband Orlando Bloom to help out with son Flynn and the two parents are apparently pretty amazing at co-parenting their son. In fact, back in 2017 the Pirates of the Caribbean actor shared a photo of Flynn hugging a billboard poster of his mom with the sweet caption:

we came across this billboard in china while he was visiting me on set he loves his mum and what's not to love- she's a wonderful mother a great friend and co parent so blessed and grateful.

And of course she also has her husband Evan Spiegel, who apparently is a great listener and totally gets what she needs, as she told Harper's Bazaar.

I have to say it sounds like a pretty idyllic set up for three little boys to be raised in harmony.

Until they discover superheros and then everything changes but Miranda Kerr shouldn't worry, she has loads of time.