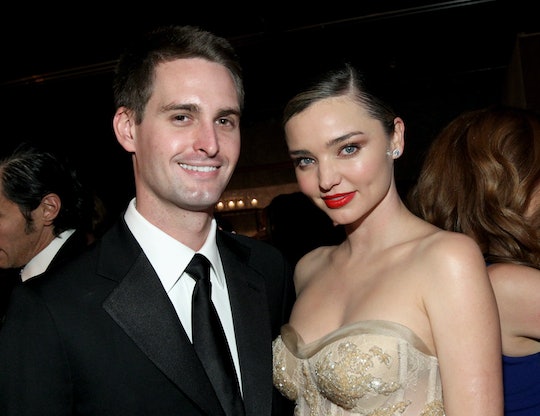 Miranda Kerr Is Pregnant With Baby No. 2, & She's Super Excited To Expand Her Family

It looks like Victoria's Secret model Miranda Kerr is having one heck of a year in 2017. Not only did she marry Snapchat founder Evan Spiegel earlier this year, but now it seems Kerr is pregnant with baby number two. Let's all take a moment to reflect on how beautiful this baby is probably going to be... I mean, can babies have cheekbones? Because if they can, this baby is going to have crazy cheekbones if it takes after Kerr.

Kerr is already mother to 6-year-old son Flynn Bloom, who she welcomed in 2011 with ex-husband Orlando Bloom. In fact, young Flynn was named in the official pregnancy announcement shared by a family's spokesperson, according to E! News:

Miranda, Evan and Flynn are looking forward to welcoming the newest member of their family.

Kerr and Spiegel were married in May in front of 45 family members and friends, and young Flynn, who reportedly had a great time running around with the flower girls, according to E! News. Kerr told the news outlet that she always knew Spiegel was The One:

He's just a really kind person—very genuine, very authentic. I really appreciate that about him. And also, he's very intelligent. We started out as friends, and eventually, it developed into more.

Neither Kerr's nor Spiegel's reps immediately responded to Romper's request for comment.

In an earlier interview with The Daily Mail Kerr said the couple wanted to go the traditional route and wait until they were married before trying to conceive:

I'm not planning for a child yet. Not until after we get married. My partner is very traditional. We’re just waiting.

Neither Kerr nor Spiegel have shared the baby's due date with the media nor have they shared the baby's sex. Considering how protective Kerr has been of son Flynn's privacy, that makes absolute sense. Flynn's face has not been photographed in quite some time; both Kerr and Flynn's dad, Lord of the Rings actor Orlando Bloom, have kept his face out of the media. So it makes sense that she would be just as private about her second baby.

While the Australian-born model might be private about her kids, she has been very open about how much she loves being a mom to son Flynn. She has made his happiness a priority, even going to great lengths to make sure she keeps her relationship with Bloom on a positive level to make life easier for Flynn, according to People.

When Kerr and Bloom ended their relationship amicably in 2013, she told Harper's Bazaar Australia:

Flynn is the most important thing in both our lives. And because we share that bond, we both feel it's important to be united. We respect each other and with respect comes understanding.

And it's clear Bloom feels a similar way. In April, Bloom posted a lovely message on Instagram for Kerr's birthday, writing:

When Kerr was pregnant the first time around, she worked hard to stay as healthy as possible. She told The Daily Mail:

I practiced yoga throughout my whole pregnancy and I eat really healthily and I just continued that, really. I have been working out. I've been doing resistance training and some good squats, sit-ups and all that stuff.

Chances are, the ultra-fit model will work to stay healthy throughout this pregnancy as well.

As the year draws to a close, it looks like Miranda Kerr might be winning 2017. She has a healthy relationship with her fellow co-parent, which is an amazing feat on its own. She married a man who seems to make her happy, and now she's expecting her second child. Not such a bad year, all in all.

More Like This
Pregnant Keke Palmer Is Worried Her Suddenly Clingy Cat Is Contemplating “Murder”
Princess Eugenie Shared A Precious Photo To Announce She's Pregnant With Baby #2
Sally Field Is The Ultimate Cool Mom Who Once Tried To Set Her Son Up With An Olympian
Marie Kondo Gives Up Tidying Post-Kids, Sparking Joy For Moms Everywhere
What Parents Are Talking About — Delivered Straight To Your Inbox