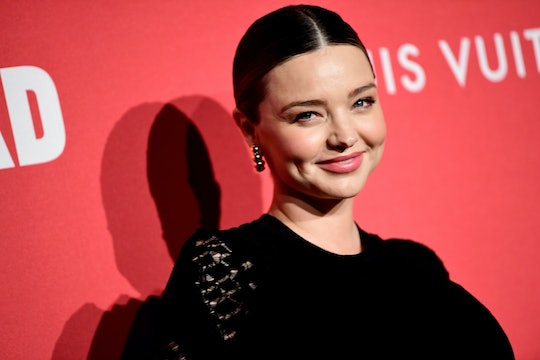 Miranda Kerr Welcomes A Son, & His Name Is So Meaningful

There's nothing more exciting than the birth of a baby, is there? And not that celebrity babies are extra special or anything, but it's always a little thrilling to read about another baby being added to the recent celebrity baby boom I think. The latest celebrity to welcome a baby? Actress Miranda Kerr welcomed a son, and his name is seriously so beautiful. Not to mention unique, which is a pretty tall order to expect from a world where names like Stormi and True and Chicago have become the norm for the younger set. But model Miranda Kerr and her husband, Snapchat co-founder Evan Speigel, managed to choose a name that was both sweet and original: Hart.

Kerr reportedly gave birth at Cedars-Sinai Medical Center on Monday, according to TMZ. Both mother and baby are doing well. It seems the baby's name actually has a pretty special meaning; he was named after Speigel's grandfather, a prominent San Francisco lawyer. This is the second son for the 35-year-old Victoria's Secret model; she also has a 7-year-old son whom she shares with ex-husband Orlando Bloom. The couple were divorced after three years of marriage in 2013.

Kerr couldn't have chosen a better time to welcome her new little bundle of joy; with Mother's Day coming up on Sunday, she should be perfectly placed to get some pretty great loot after just giving birth, right?

Speigel and Kerr have one of those romances that is just so common place, you know? After meeting at a Louis Vuitton party a few years ago, as these stories just always seem to start, the Snapchat co-founder and supermodel found themselves sharing pithy witticisms about their construction woes; he was building a house in Los Angeles, she in Malibu. I mean, you get the drill. And then the editor-in-chief of Harper's Bazaar, Glenda Bailey, predicted they would get married, as Kerr told Jimmy Kimmel on Late Night with Jimmy Kimmel, and there you have it. The couple got married in May 2017 and welcomed their first baby together a year later. It's like the story of my own life, only with beautiful people and a better narrative.

While neither Kerr nor Speigel have spoken publicly about the birth of their baby boy, one member of the family is certainly going to be excited; big brother Flynn. The Australian model told Kimmel back in February that Flynn is "very excited" to become a big brother; in fact, he's been waiting for this to happen for a long time.

He’s very excited. He’s so excited that Evan and I had been together for a while and he was like, ‘When are we going to have another baby brother or sister?’ And we were like, ‘Look, we've got to get married first.’ So the day after the wedding, he comes running in and he’s like, ‘Mommy, is it in there?’ I was like, ‘Honey, give it a minute.'

Well, Flynn, that minute is apparently up. And now you get to have a baby brother.

Flynn obviously won't be the only one to get excited about the new baby. This is Speigel's first child, which is always a pretty interesting time, and Kerr hasn't had a baby for seven years, which I can tell you from experience means everything feels sort of new and different again. Plus, she won't have to worry about those tricky hormonal headaches she told Us Weekly she was suffering through during her second pregnancy.