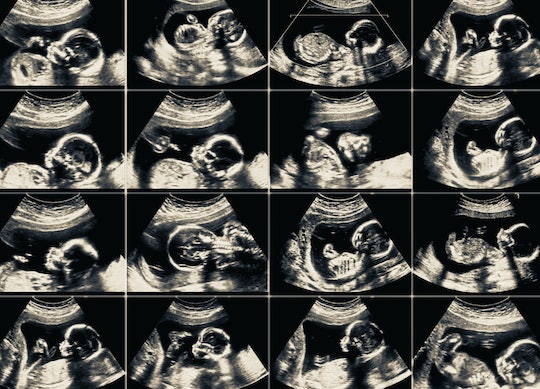 When I lost my baby back in 2013, it was because of a very early miscarriage. Because of the little amount of time I spent being pregnant, it was though my child had never really existed, which made the next few years hard — I felt like they had been forgotten by those around me. Being that I did in-vitro fertilization (IVF), I have a photo of my baby as an embryo. That photo is sitting in a homemade memory box I have hanging on the wall of my bedroom, with the small gifts I received in those brief days when I knew I was pregnant. But I realize many women won’t even get that. Miscarriage grief for early losses is real, but while some hospitals have implemented procedures to help loss parents suffering from stillbirths, women with early-term pregnancy losses often leave the hospital with nothing more than discharge instructions.

Two hospitals in the U.K. are introducing a way to memorialize the babies lost to women in early pregnancy: ultrasound photograph keepsakes. Kevin Phillips, the hospitals’ chief medical officer, stated, “We understand and appreciate how difficult it is to lose a child, regardless of when that occurs in a pregnancy.” He acknowledges that not all women may be in the state to want a photo, but the option is there if they feel they might want it.

We as a society have evolved enough to treat late-term miscarriages and stillbirths with the respect they deserve. Now it’s time we treat women who have lost babies in early pregnancy with the same dignity — and it could start with one ultrasound.

Here in the United States, complications in early pregnancy usually result in a visit to the emergency room, rather than being treated on a labor and delivery unit. Fortunately, with more mother-baby and birth centers popping up, this concept is slowly changing. It’s understandable that when a woman’s life is threatened due to bleeding, she will need to be treated in an equipped emergency room. And there are also care packages given to moms on labor and delivery floors when there is a stillbirth or death of a baby soon after birth. Those packages are wonderful. But the women who are rushed to surgery for an ectopic pregnancy or, heavily bleeding from a miscarriage, come to the emergency room are typically sent home with discharge instructions and phone numbers for pregnancy-loss support. Sometimes the medical community forgets that these, too, are moms who have just lost their whole world, and it shouldn’t matter how early it was.

My babies will always count to me. Hearing a medical professional validate that was actually really healing.

For loss parents, the simple acknowledgement of their previous pregnancies can be very important. Kristin, who lost two pregnancies before carrying her third to term, tells Romper that one of the best moments in her pregnancy came at 41 weeks during a non-stress test in the hospital. "I mentioned lightly that I had two early miscarriages and said I wasn’t sure they counted," she says. The nurse "looked me right in the eye and said that they absolutely counted. Thinking about it now makes me tear up. My babies will always count to me. Hearing a medical professional validate that was actually really healing."

What these two hospitals in Europe are doing is showing that all women who had a miscarriage deserve to have their babies remembered. What they put into motion is something we in the U.S. need for women like me: those who grieve a baby that was so small they may not even show up well on a ultrasound. Having that single picture of my child is all I have to prove that they existed in me. It’s how I keep my baby alive. I would have loved to have an ultrasound and see my sweet babies at whatever stage their little earthly bodies had developed to. It would make the loss less of a private grief. There are funerals to help families grieve the loss of loved ones, but no real ceremonies that help families grieve the loss of early pregnancies. Even just acknowledging that this loss is real would be a step in the right direction.

My OB at the time said to me that at least I could drink on my honeymoon now. I wasn’t told until years later that we could have had our baby biopsied to see why we lost her,

Katie was 10-and-a-half weeks along when she miscarried. "We saw a heartbeat one week and the next she was gone," she tells me. The response from her OB in the next moment was crushing. "My OB at the time said to me that at least I could drink on my honeymoon now. I wasn’t told until years later that we could have had our baby biopsied to see why we lost her," she recalls.

For my ectopic pregnancy, my baby was still very much alive. My baby had a heartbeat but had gotten comfortable in my fallopian tube instead of my uterus. Both the nurse who had my case and my post-op nurse were heavily pregnant. There was another patient in recovery with me who was requesting that his wife and infant son be allowed back to see him, and I had to advocate for myself for privacy, for a moment to grieve without witnessing a mother and her new baby close at hand. I had just lost my baby — who had a heartbeat and whom was my last biological child. The sight of my very pregnant nurses and an infant baby was not what I wanted to see when I recovered.

My babies mattered. They have names. I have tattoos for them. They’re a part of me and my life story and if someone were to offer to remember them by taking a picture for me it would have meant the world. We will never get to look into our babies eyes or watch them grow. But having that moment frozen in time — to most moms that would be irreplaceable.