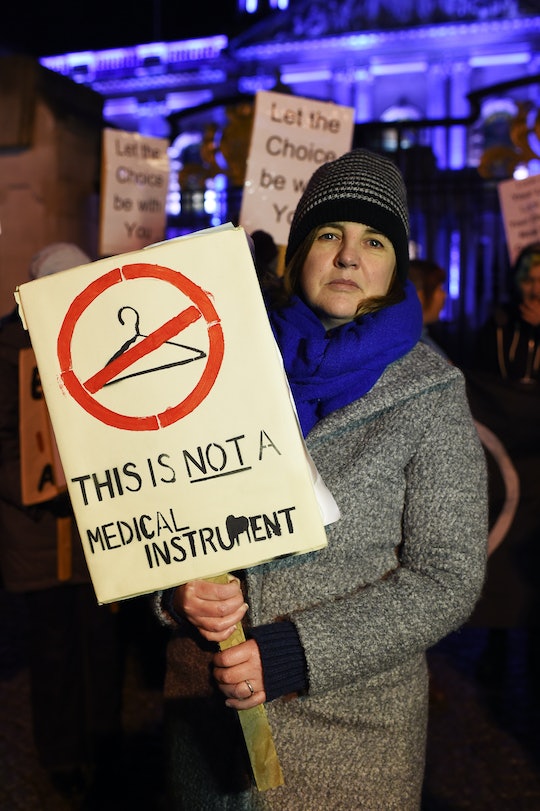 Right now, in Mississippi, reproductive rights activists are fighting back against a slew of anti-choice bills that would only serve to harm people seeking an abortion in the state. The latest to join the list is House Bill 510, an anti-abortion measure that is considered of the most restrictive in the country. State lawmakers advanced the legislation on Thursday, which means Mississippi could pass the earliest abortion ban in the United States — and that would be dangerous for women everywhere.

HB 510, dubbed the "Gestational Age Act," would prohibit abortions after 15 weeks of gestation, except in the case of a medical emergency or severe fetal abnormality, according to Rewire. The proposed bill, sponsored by Republican Rep. Becky Currie, is the first of its kind in the country, Rewire reported, and would shave off more than a month from the ban Mississippi already has on the books.

The anti-abortion bill first passed the Republican-controlled house in February, and sailed through the state Senate in a 35-14 vote on Tuesday afternoon, according to The Clarion Ledger. The bill headed back to the House, which voted Thursday in favor of the Senate version of the bill, CNN reported. It now heads to Gov. Phil Bryant, who is expected to sign the legislation into law.

Bryant, a staunch anti-choice politician, has repeatedly voiced his support for the measure, according to The Clarion Ledger: After the bill passed the Senate, Bryant said:

I want Mississippi to be the safest place in America for an unborn child. House Bill 1510 will help us achieve that goal, and I encourage the House to pass it and look forward to signing it.

During the Tuesday session, senators voted to remove the House version's provision that would impose criminal penalties on doctors performing the procedure after the 15-week mark. But, in a 16-33 vote, Senate lawmakers rejected an amendment that would have allowed for exceptions for survivors of rape or incest, The Clarion Ledger reported.

But in anti-choicers' quest to make the state "the safest place" for fetuses, people seeking abortions will undoubtedly suffer. A 2014 American Journal of Public Health study found that severe restrictions on abortion have caused more than 4,000 women in the United States to carry unwanted pregnancies to term (in some case, these pregnancies could have been non-viable, too). State anti-abortion laws disproportionately affect young women and people from low-income families because they're forced to raise money for travel and procedure costs, further delaying care, according to researchers.

Mississippi is one of 17 states that already prohibits abortions at about 20 weeks of gestation, and one of 24 that has placed gestational age limits on the procedure, according to the Guttmacher Institute. If Bryant does sign HB 510 into law, Mississippi would be the only state to successfully ban abortion before 20 weeks; a failed federal GOP bill attempted to limit the procedure to six weeks.

HB 1510 is part of a strategic attack on Roe v. Wade and a blatant attempt to chip away at women’s rights. Mississippi legislators know that if it passes, HB 1510 will be the subject of a lengthy and expensive legal battle, with Mississippi taxpayers footing the bill. The thing is, they don’t seem to care.

In the end, Mississippi's legislation banning abortion at 15 weeks is another attempt to control people's bodies and the choices they make with their bodies. The bill may "protect" fetuses, but the emotional and physical health of people seeking abortions will be put at risk. Then again, when have youth and adults ever mattered in the abortion debate?