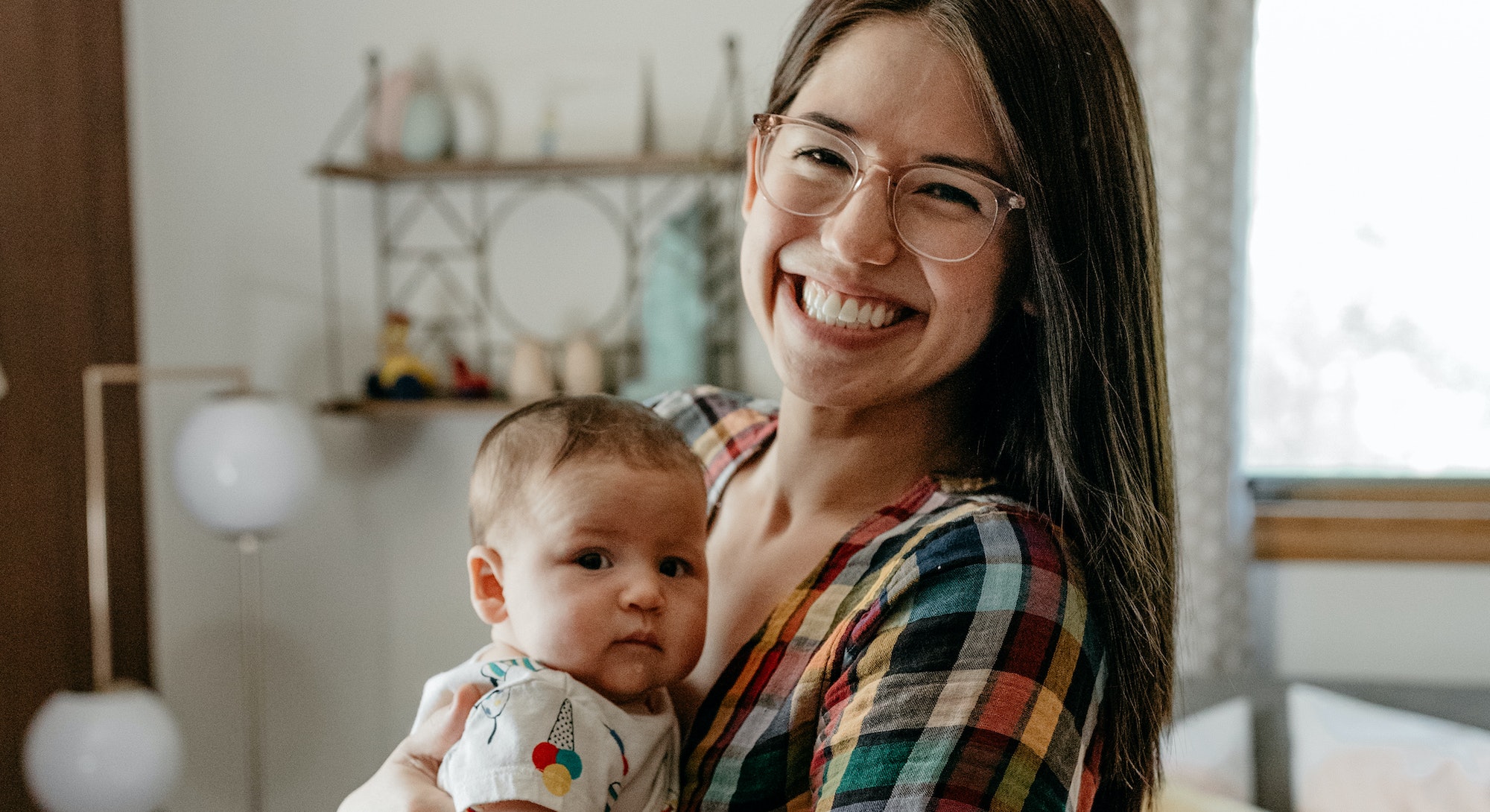 Molly Yeh’s Baby Nursery Is So Well Organized, It Hurts

On a farm in rural Minnesota, Molly Yeh has been soaking in her last days of maternity leave — at least this was the case when I interviewed her as the subject of Romper’s latest installment of Contain Yourself, where we guiltlessly analyze (read: drool over) a well-organized space. In two days she's back on set to start filming the fourth season of her cooking show which airs on The Food Network, Girl Meets Farm. Yeh's show happens to be filmed in her actual home which she shares with her husband Nick Hagen, a fifth-generation sugar beet farmer who grew up on the farm, and her nearly 4-month-old daughter Bernadette Rosemary Yeh Hagen.

Working from home may sound like a convenient set-up for a new mom, but in Yeh's case, it means the rest of her house will look a bit chaotic over the course of filming (there's a lot of equipment and effort that goes into producing a TV show). Today over the phone though, she doesn’t sound like a frantic new mom agonizing over having to go back to work, or the state of her house — and perhaps her daughter’s pristine nursery has something to do with Yeh’s chill factor. It’s within this room that Yeh is perched for our call, ready to talk wood paneling, how the KonMari method helps her keep baby Bernie's wardrobe in check, and the brilliant organizing hack she learned from her sister-in-law.

“It’s a very calming room to be in,” Yeh says of the nursery, and looking at the photos, you can’t argue with that. Despite there being a lot of patterns, they’re grounded by “soothing solid tones and lighter colors so that they could all just bleed together,” Yeh explains. But she couldn't have pulled it off without the design team at Crate & Kids who she partnered with to decorate Bernie's room. "My original mood board was just all over the place," says Yeh, who admittedly is "so bad at seeing the big picture." It may just be me, but the overall palette is pleasantly reminiscent of a jar of pastel rainbow confetti sprinkles — fun to look at and not in the least bit agitating to the eyes. You can’t help but feel a bit like you’re time traveling to someone’s parents’ or grandparents’ house. (We can probably thank the wood paneling paired with wall-to-wall carpeting for that.)

The cozy space is outfitted with all the things you’d find in a typical nursery: a crib, a diaper-changing area, a place for adults to sit, clothes, books, toys, and gear. In fact, there's actually a lot of stuff in this room, but you’d never know it, because it’s organized in a clever way to keep the clutter hidden and easy to tame. Molly reveals that there's actually a forgiving system that allows for chaos and places for things to be haphazardly thrown, but the secret is that the clutter is contained and out of sight within the pink storage bins and white rattan baskets that are neatly labeled by category (bibs, stroller accessories, carriers, 6-12 months, 12-18 months...). For that reason we will not be showing you the contents within these vessels, but that’s exactly what moms need: a system that works just enough and keeps us just sane enough to get through the day without being unreasonable.

Here’s what else Yeh had to say about the space where Bernie spends half her time; the other half being the living room where one would find a play gym, more toys, lots of crinkly books, and a nursing chair. (Yep, sounds about right.)

Talk to me a little bit about your design process. What was this room before, what were you envisioning, and what is the outcome?

The room that [Bernie's] nursery is in is our second bedroom — it’s our only other bedroom besides our bedroom — so thus far it’s been a guest room, and it’s kind of like a catch-all for any other reasons we would need a second room. Because of that, we wanted to make changes in functionality of the guest room, but also of course, bring in all of Bernie’s things. So that’s where the concept of having a daybed came in; where we can have this part-couch, part-bed scenario that, when I’m in there playing with her, we’re sitting on the daybed, and if I ever need to get work done, I can use it as a little couch. When my mom comes to visit, she can use it as a guest bed, and when Bernie grows up, she can use it as her twin bed. There’s a trundle that she can use for sleepovers, which I’m so excited about. Yeah, so just kind of keeping the versatility of the room while also really making it Bernie’s nursery was a priority for us.

In her main clothes bin, it’s just things that I can close my eyes, reach into, and then know that she’s going to be able to wear it and be comfortable in it.

It doesn’t seem like there was an attempt to hide the age of the house — the wood paneling on the walls is not really what you’d call modern, but it still works.

Totally… that was another huge thing that we wanted to maintain in the room. This house has been on the farm for, I guess, almost 60 years now. Nick’s aunt grew up in this room, Nick and his sister when they would spend weekends at grandma’s, they slept in this room. It was the hair and makeup room for Girl Meets Farm for a while, so this room has been many things and we wanted to make this room feel like it would be on a farm. On like a generation-old farm. And so, to keep the wood paneling was a big priority for us, and to just kind of keep the cozy, farmy, old-school vibes of it was important, but then also add some fresh layers as well.

I do have to talk to you about your closet because it’s so nicely organized. Are you able to maintain it?

Honestly, I’m the worst at typically maintaining a closet but the fact that everything is in its own bin makes it very easy to maintain. Like, I’m all about the bins where you can just throw stuff in, and the bins themselves, if you look at some of them they’re kind of sloppy, but the fact that each type of thing is glooped into a bin and everything has a spot, makes it so easy. Especially during moments when Bernie needs an emergency diaper change or an emergency outfit change, I can just grab things with one hand. And then likewise, if I’m cleaning up, I can throw things in the bin with one hand.

Some of the outfits hanging in Bernie's closet have been passed down from family members.
Rolled-up blankets are pleasing to the eye and space-saving.
Inspired by Marie Kondo, Yeh follows the KonMari style of folding clothes to maximize space and to be able to quickly grab an outfit in a pinch. Blowouts, amirite?
1/3

Whose brilliant idea was it to organize clothes that are too big for her by age?

That was something that I learned from my sister-in-law. [She] has a baby who is a few months older than Bernie, so she’s kind of been our guide with all things Bernie because she’s just a few months ahead of us, so she can tell us which doctor is the best and which bottles are the best, and so we went over and took a tour of her nursery and she had all of the clothes organized by size, and I knew immediately that that’s what I was going to do.

What are your thoughts on Marie Kondo?

Love her! Yeah, like the whole keeping things in cute containers is very much inspired by Marie Kondo, and I try to fold Bernie’s outfits like that too.

I did that with my toddler’s clothes and there’s so much more room in her drawers by folding it that way.

Yeah! We have completely Kondo-ed her wardrobe, too, because there are certain types of baby clothes that are just too complicated to put on her, or she’s just not comfortable in them. Most of the outfits that she wears are just like soft onesies, and so we just kind of passed away a lot of the things that weren’t soft, one-piece, footed pajamas — and we’ll save some for special occasions. But in general, in her main clothes bin, it’s just things that I can close my eyes, reach into, and then know that she’s going to be able to wear it and be comfortable in it.

How about as Bernie gets older... before you know it, she’ll be crawling — do you envision her nursery transforming when this happens?

We definitely designed it so that everything would be very sturdy and very safe for when she does end up climbing on things. Her soft toys, the toys that she can play with right now, are on the lowest bin, and then on the higher bins there are the wooden blocks and the wooden puzzles, and sturdier, older-kids toys are in the higher bins, so those will kind of grow with her.

Decor-wise, we kind of kept it to where a lot of the baby-ish decor, for lack of a better term, is in the linens. There’s the soft pink bunny crib sheets, the changing table cover, the bed sheets — those are things that, when she’s older and has different interests, we can change those out. So if she’s interested in, I don’t know, sports or zoo animals or the trombone, then all of these bigger furniture pieces that we have are so neutral and timeless that we can kind of dress them up according to her interests.